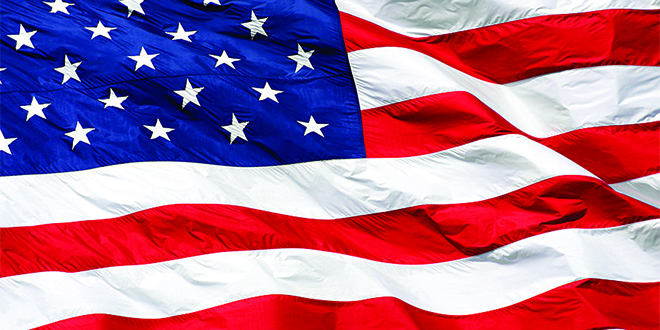 Marco Men’s Club Veterans Picnic and Patriotic Day was a day to celebrate and honor the club’s members from all branches of the military, and other Marco Island veterans.

The well-planned event at Mackle Park drew a crowd of more than 100 guests. Mike Levine, the club’s Sargent at Arms said that the event has become a tradition, “held annually to support and recognize our veterans.” He said that many of the Men’s Club members are veterans.

The Marco Island Strummers provided patriotic music. Following taps and the Pledge of Allegiance, a somber moment of silent appreciation was held. Mike Levine said, “For 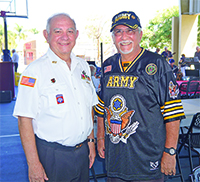 those who have given of themselves to our country.”

Veterans of the Army, Navy, Air Force, Marines, Merchant Marine, U.S. Coast Guard (USCG) and Civil Air Patrol (CAP) were asked to stand and be recognized, as the crowd clapped in sincere appreciation of their service.

Lee Henderson, who served in the Vietnam War-era, introduced the four guest 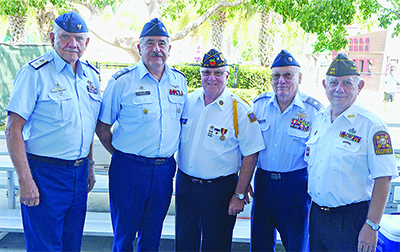 Speaker Walter Jaskiewicz, past commodore of the USCG, was with the NSA during Vietnam. He asked that guests “Thank each and every veteran that’s here for their service.” He spoke of how General George Washington achieved victory against the British against all odds, with his motto of “Victory or Death.” The camaraderie of the troops was a major factor in their success. He ended by telling the guests, “Do not forget those who fought to defend the freedoms of our country.”

Robert Corriveau, commander of the Civil Air Patrol squadron, recalled the history of CAP and its important role on the island. Corriveau was in the 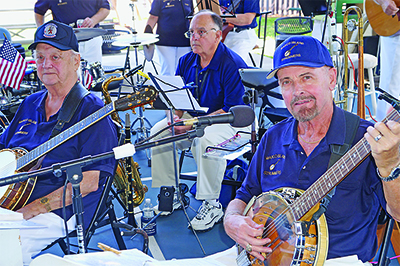 submarine corps in the Vietnam era.

Tom Meeker, commander of VFW Post 6370, Marco Island, and an army veteran, told guests about the many things VFW does, including supporting veterans programs, promoting patriotism in schools, and providing educational scholarships. Many Marco Islanders are familiar with the VFW because it is the group that sells American flags on the island. He also spoke of the camaraderie among members, an important theme throughout the event.

Lee Rubenstein, American Legion Post 404 commander, spoke about the challenges many veterans face getting healthcare and other services. Telling listeners that as close to Marco Island as Naples there are homeless veterans in

The Men’s Club drew a full house in honor of Marco’s veterans.

need, he said, “There shouldn’t be such a thing as a homeless veteran in this country.”

Last year’s event gave a special honor to WWII veterans. This year, there was a focus on Vietnam veterans. Lee Rubenstein explained that the Vietnam-era veterans “were never officially welcomed home or thanked for their service.” Hopefully this event, and the others that followed helped to show our Vietnam veterans that they are appreciated.

Following the speakers, guests enjoyed a barbeque from Cracklin’ Jack’s and more wonderful music from the Strummers. The afternoon accomplished its goal of celebrating and thanking the service and sacrifice made by our veterans. For information on the Marco Island Men’s Club visit www.marcomensclub.com.