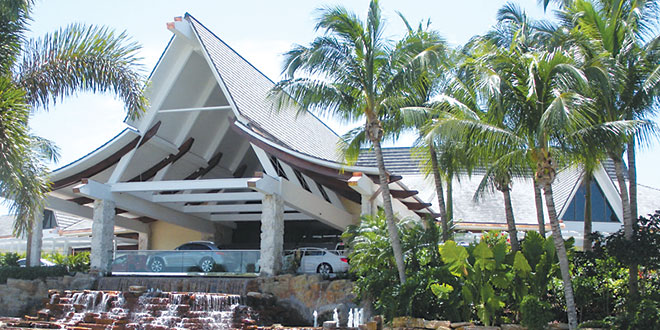 It’s a case of one down and one to go for the Marco Island Marriott Beach Resort, Golf Club and Spa.

The resort has reopened, with the July 31 completion of the bulk of Phase One of a $250 million expansion and improvement project that began May 4. When work is completed at the end of next year, the resort will be ready for its transformation, in January 2017, from a Marriott to the more upscale J.W. Marriott brand, the Marriott brand’s first beachfront resort in the continental United States.

The August 1 reopening was called for in the project’s construction timetable. Bob Pfeffer, the Marco Marriott’s director of marketing, said that some furniture and lighting fixtures for the lobby are on back-order and should be received within one week. Another segment of Phase One, the opening of Ario, the restaurant that replaces the former Kurrent’s with a redesigned appearance and a new dining concept, is set for September 15, he added.

“Probably the other big (Phase One) project is the Tiki Bar,” said Pfeffer. “We’re not sure of the reopening exact time frame, but we’re thinking probably late fall.” The redesigned Tiki Bar will be covered with a thatched roof that resembles the resort’s beach Chickee huts, and also feature fire pits and outdoor seating and a specialization in rum drinks.

The Marriott’s health club should reopen in about one week. “In the meantime, we have our spa health club that we can direct customers to,” said Pfeffer.

Work on Phase Two is underway, and it includes:

When completed, Marco’s Marriott will feature 100,000 square feet of event space, 810 guestrooms and suites throughout the main resort, the Lanai Tower, 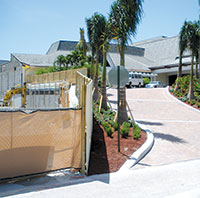 Work is still underway on the renovation and expansion project at the Marco Island Marriott Beach Resort, Golf Club and Spa.

Pfeffer said about 250 rooms are currently open to guests and 450 additional rooms will also come online by December. “Really, the goal is to have 700 rooms back before we hit the high season mark, which is pretty much Thanksgiving,” he added.

Pfeffer said he doesn’t foresee any more street closures for the project “unless something unexpected happens” and that the resort has taken pains to erect temporary walls to buffer guests from the ongoing work. Social media sites are monitored for guest comments since the reopening and “so far, the response has been 100 percent positive,” he added.

During the three month long closure, many of the resort’s employees were shifted to the Ritz Carlton in Naples and other Marriott Resorts, including the Harbor Beach Marriott in Ft. Lauderdale, while others found work with the project’s construction crews. Some associates simply opted to take an extended break from working.

Pfeffer said the August 1 reopening was exciting for several reasons.

“The Marriott associates who had three months away, I was really excited to see those faces return,” he said. “I think that was probably the most refreshing thing, next to the first guest walking through the door and seeing their face and hearing their comments.”

As of August 1st