Robin Lewis of Coastal Resources Group explains the severity of the dying mangroves while standing amid the devastation.

A major announcement was made regarding the restoration of mangroves along SR-92 on Thursday, December 8. The area, known as Fruit Farm Creek, which runs from Cape Marco all the way to the Goodland Bridge, is visibly dying. After six years of hard work, Coastal Resources Group Inc., a 501(c)(3) non-profit organization, has announced that they will begin to restore the area owned by Rookery Bay beginning on February 1, 2012.

State Road 92 was built in the 1930s using the dredging and filling technique used to build up much of the area’s roads. “When the construction took place there was only one culvert placed between the north and south sides of the road. Today, you would actually bridge this area to allow for the flow of water,” Lewis explained.

That flow of water is necessary for the survival of the mangroves. The road has basically disrupted the flow of the

Bob Olson points out the original and only culvert under SR-92. The culvert, built in the 1930s, does not allow for proper flow of water.

area’s natural tides, causing parts of the mangroves on both sides of the road to flood and die. That’s right, too much water kills mangroves. Roots of the black mangrove shoot up out of the ground to gather oxygen. When they are constantly covered in water, they don’t receive that oxygen and they die.

The mangrove ecosystem is extremely important to the ecology of our area. Liberta Scotta of the U.S. Department of the Interior Fish and Wildlife Service, stressed the importance that the mangroves serve as natural fisheries for all kinds of species, especially snook. The loss of these fisheries also means a decrease in the local bird population.

Scotta’s agency understands the importance of saving these mangroves and has supplied the initial grant to fund the restoration efforts. The U.S. Fish and Wildlife Service granted Coastal Resources Group $75,000. This amount will allow for Phase I of the project to begin in February. 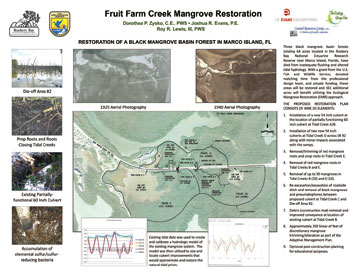 This sheet, with aerial views and graphs of tide flow, explains the problem in depth. It may be seen in a larger version at marcomangroves.com. SUBMITTED PHOTOS

The project includes adding three more culverts, or large 54” pipes, under the road in specific areas to allow the natural tide to once again occur. This will minimize the flooding and allow the mangroves to grow back. Coastal Resources has made an agreement with the National Oceanic and Atmospheric Administration (NOAA) that can make this project a reality. NOAA will match funding for the project on a 3 to 1 basis. If Lewis and his volunteers can raise $150,000, NOAA will grant the $450,000 necessary to finish the project.

Activist and Marco Island resident, Bob Olson, has been working towards the mangrove restoration at first independently, and now with Lewis. As Olson explains, “this is a problem we can solve. It is simply a matter of plumbing.”

And funding, of course. Lewis and Olson are calling for all those concerned to donate towards the $150,000 needed to continue this project. Donations may be sent to Coastal Resources Group at P.O. Box 30, Marco Island, FL 34146. To learn more about the efforts to save this vital area visit marcomangroves.com