Marco Makes a Move Or is it just another stalling tactic? 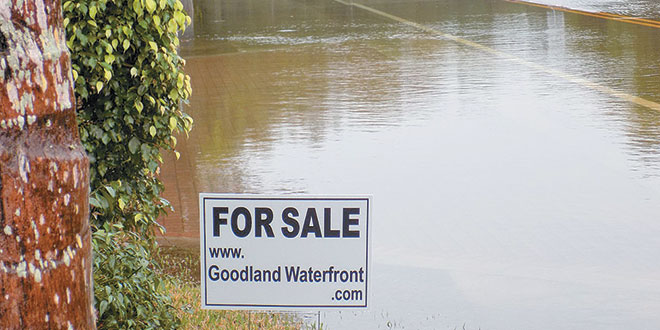 Waterfront real estate advertised at what is becoming Goodland’s new waterfront. Tide can be seen flooding in from the Marco River (upper right), as a stream of water pours in from the Gulf (upper right, middle). Ironically it comes in through a drain installed to remove excess storm/rainwater. (1/17/16)

In 2002, the City of Marco Island (CMI) took over jurisdiction and responsibility for Goodland’s only access road. Since that time, due to heavy traffic, frequent flooding, and inadequate maintenance, the road is deteriorating at an alarming rate. I have written four articles in this newspaper about the situation in which the road was rightfully termed “Goodland’s Orphaned Access Road.” Orphaned, because CMI has neither the will nor the money to correct the mounting problems this road poses for Goodland residents. Orphaned, because Collier County (CC), although having the money and the will to fix it, has no jurisdiction over the road, having ceded it to CMI in 2002. Consequently all we get in Goodland are washboard rides on this crumbling road, punctuated by frequent flooding during many spring tides. The Goodland Civic Association (GCA) has been agitating for a solution for over 15 years.

Jack Miller is a licensed road construction superintendent in the State of Michigan. In season, he lives next to Goodland Road. Steve Morgan is a licensed civil engineer, and a partner in an established east coast civil engineering firm. This firm has planned the construction of numerous road projects. Morgan is a full time Goodland resident and has served on the Goodland Road Committee of the Goodland Civic Association (GCA) for the past four years. Both Miller and Morgan agree that CMI has simply put “Band-Aids” on Goodland Road, doing nothing to address the deterioration of the road. Morgan, who has spent hours studying the situation, believes that because it is so often underwater, the base of the road needs replacing. “It’s the water,” Morgan says, “Water has always inundated the sub base. 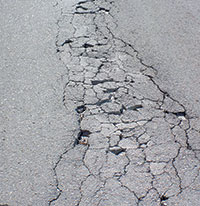 Disintegration or raveling occurs at the site of unattended cracks, or more commonly at the edges of the road. Goodland Roadhas plenty of both. (1/26/16)

The base of the road today probably consists mostly of the shells laid down when the road was built.” Morgan says the road is now being assaulted by water from both sides, from underneath, and from water overlaying the road. As the heavy traffic passes over the road, water is pumped up though the road. “It is like when you are walking through mud,” explains Morgan, “As you step into the mud, it squishes up on either side of your feet. When water weakens the soil under the pavement, traffic can flex the asphalt up and down until it breaks apart. That is exactly what is happening here.” Morgan says that CMI has been dealing with the surface deterioration only. When the potholes become too numerous to ignore, a Marco crew comes down for a quick fix. They shovel either hot or cold asphalt into the pothole, tamp it down, and move on to the next. “Throwing asphalt into a hole in that road is not the answer,” says Morgan, “The road’s asphalt surface course is disintegrating. Filling potholes in a failed road is like putting a Band-Aid on a compound fracture. It does nothing to deal with the underlying problem.”

What does CMI hope to gain by procrastinating in the proper repair of Goodland Road? About 1.5 million dollars. This is the amount CC still owes under the 2002 agreement in which they ceded the road to CMI. CC has so far paid out $13.5M to CMI in agreed upon annual payments, part of which was for the maintenance of Goodland Road. But according to Mike Barbush, past GCA President and Chairman of the GCA Goodland Road Committee, CC has 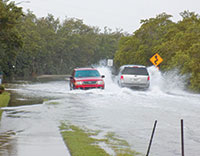 Saltwater flooding into from left, Gulf of Mexico and from right, Marco River. (1/17/16)

now decided to withhold the final $1.5M, until and unless CMI takes concrete steps to rescue the road. “Collier County is $500,000 delinquent [on payment of $1,000,000, which was due last month],” Barbush said, “They (the County) will probably withhold the remaining $1.5 million. This will cause a $1 million shortfall in CMI’s budget. It’s going to come down to the lawyers.”

So, on April 7, 2016, in order to demonstrate to the County that they are attempting to properly fix the road, CMI solicited bids from engineering companies “to prepare a cost estimate to mill and overlay the existing asphalt pavement surface.” The solicitation went out as RFQ-16-015, RFQ being a Request for Quotation which is normally used to give potential suppliers an opportunity to competitively cost the final solutions. CMI scheduled a “Non-mandatory pre-proposal conference” for April 19. Two engineering companies showed up – Hole Montes, Naples, and Dannick Engineering Consultants, Orlando. Present for the CMI were Roger Hernstadt, City Manager, Tim Pinter, Public Works Director, and Lina Upham, Purchasing and Fiscal Analyst. Pinter and Hernstadt did most of the talking. Pinter thought that repairing the road could cost north of $4 million. Hernstadt agreed, especially if the road had to be raised and rebuilt. “In that case, it could cost four times as much as just milling and resurfacing,” Hernstadt said, “This would be beyond CMI’s resources.” Hernstadt called for county participation and meetings of the two staffs to this end, with possible meetings down in Goodland. He pointed out that a section of the road is owned by CC and also subject to flooding. “Elevation of CMI’s section of the road could cause more flooding on the 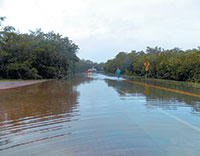 Tom Barrett on a “rescue mission” for a Goodland friend. The cab driver refused to drive on Goodland Road. (1/17/16)

CC section unless it is also rebuilt,” he said. “Goodland says that the road was a low grade road, with only a shell base, when it was put in. Now they want an upgrade and elevation that will last 30 or 40 years.” Hernstadt said that the RFQ calls for tests, which will determine if the base is in fact deteriorated and needs to be replaced. If this is the case, because this is considerably more than milling and repaving, it will require the Conservancy to sign on. (The Conservancy has been adamantly opposed to changing the footprint of the road, unless prohibitive restrictions protecting the mangroves are agreed to.) “It then becomes a political issue and could get adversarial,” Hernstadt warned. Hernstadt wants a series of meetings in Goodland and with the County to resolve these issues.

It is no secret that there are many in Goodland, including the GCA Board of Directors (of which I am one) believe that CMI has been stalling until such time as the CC pays the final $2 million called for in the 2002 Interlocal Agreement. In that agreement CC ceded to CMI those sections of San Marco Road, (CR 92) and Goodland Road (CR 92A), which lay within CMI city limits. In return, and to help defray the costs of maintaining these and other former county roads, CC agreed to pay CMI $1 million per year starting in 2002 and ending in 2017. It is also no secret that there are some on CMI City Council, who would like to dump this whole mess back on the County, but maybe not until the last drop in the CC coffers is squeezed out. In

This one’s a whopper and still expanding. Cars swerve left to the oncoming lane or right to the side. When boat trailers hit it, this hole sounds like a muffled cannon shot. Photos by Barry Gwinn

a February reply to a concerned Goodland resident, Hernstadt wrote, “Concurrently, the City Council is also discussing/exploring with the County Commission giving the road (project) back to Collier County…We expect the design contract [RFQ#16-015] will be award (sic) in late April/early May assuming receipt of the 2 County payments for 2016 (Emphasis added).” So now it can be inferred that CC will advance no more money to CMI until they take steps to repair the road, while CMI will take no such steps, until they receive more money from CC – a classic catch-22 situation with Goodland getting squeezed in the middle.

And so it has gone on – proposals and meetings galore involving GCA, CMI, CC, and the Conservancy. I have been to some of the meetings; Mike Barbush has been to most of them. Meanwhile, Goodland Road continues to crumble and sink into the swamp through which it runs, increasingly submerged beneath the rising Gulf waters. There are days when I won’t allow my wife to travel on it. There are days when I won’t travel on it. Flooding has caused at least one taxi driver to refuse to deliver his passenger to Goodland. (It was a family emergency.) The passenger had to walk in to Goodland through knee-deep water for much of the way. Someday, in the not distant future, the excellent Marco Island EMS will not be able to make it in to Goodland and someone may die as a result. Maybe then?