“Marco Magic: Cheering Their Way to the Top” 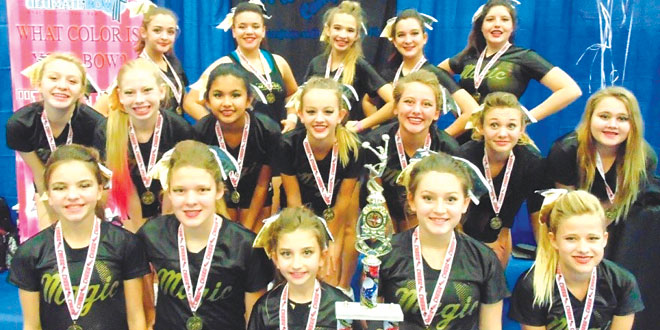 The Senior girls with their 2nd-place trophy and medals. PHOTOS BY SOPHIE TORRES

With more than 1,000 spectators eyeing their every move in the Florida Atlantic University gymnasium, both Marco Magic cheerleading teams ranked exceptionally well at the Ultimate State Competition — Bash Spirit. The two teams, a junior and senior squad, practice in the Mackle Park Community Center multiple times a week, and their hard work paid off. The girls and their two coaches, Lyndsi Koszo and Brittney Bo, entered the Boca Raton competition, on Jan. 12th, completely prepared and with smiles on their faces.

With six months of practice and two marvelous routines engrained in the cheerleaders’ brains, each team took the floor. The junior team, in a younger division, performed first. Even having watched both of their competitors perform before them, not a nerve was evident as the young girls performed a flawless cheer and dance number, complete with strong stunts and loud, happy voices. An hour later, it was much to the team’s delight to find that they had had placed first! For many of the younger girls, this was a first competition 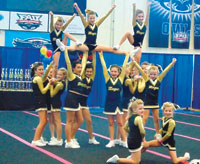 and for all of the junior team, this experience will not soon be forgotten.

After the juniors performed and were crowned first place victors, all attention was set on the senior team. Similar to the juniors, they also had two competitors in their division. After an hour of pre-show practice, the seniors took the floor. The girls performed a dynamic routine that captivated the audience. Their cheer and jump sections were exceptionally appealing to the audience. The senior girls received a second place title, only behind the overall winners of the competition.

After this successful feat at their first competition, the Marco Magic cheerleading teams are definitely inspired to conquer. In the future, they plan to compete at the Queen of Hearts competition at Nova University, in Fort Lauderdale. On top of their continuous practices, the girls fundraise frequently. They appreciate all of the support they have received from their community. The girls are excited to represent Marco Island at future competitions, and are ready to make their way to the pinnacle of success one cheer at a time.