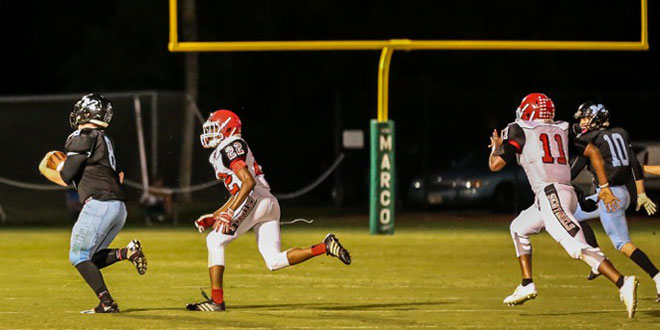 Marco Island’s Tyler Gresham outruns Evangelical defenders on a 65-yard TD run on Friday, Oct. 30. The Sentinels scored in the last 16 seconds to down Marco, 30-26.

An electrifying pass play, with but 16 seconds left, sent Marco Island Academy to a crushing 30-26 defeat on Friday, Oct. 30.

Evangelical Christian quartberack Mikey Marcelak somehow tossed a 27-yard touchdown pass to Jerramie Joseph with two MIA players all over him. Joseph caught the ball and surged to the end zone for the game winner.

The game ended with MIA’s Tyler Gresham trying valiantly to make a running play that just wouldn’t be. He lay helpless on the field as the clock ran out.

In a game where the MIA defense tackled Evangelical runners for a loss 13 times and recovered two fumbles, key plays by Evangelical made the difference.

The Sentinels had the good fortune of two negative MIA plays that led to scores.

The first came in the second quarter. MIA had the ball on their own 25 on fourth down and chose a running play to gain eight yards instead of punting. Unfortunately the Rays Austin Gross came up one yard short on its own 31 yard line.

With 30 seconds gone in the second quarter,   Chris Ceasar scored his second of three touchdowns to give Evangelical the half time lead at 13-6.

Evangelical quarterback Mikey Marcelak is swarmed by the Marco Island Academy defense in Evangelical’s win, 30-26 on Friday, Oct. 30. The Rays defense made 13 tackles for losses in the game, won in the last 16 seconds by Evangelical.

quarter. The extra point was blocked, giving Marco a 6-0 lead.

In the third quarter the MIA defense had numerous defensive plays where they tackled Evangelical runners for losses.   The defense shut down an Evangelical drive at the two-yard line, then pressured the kicker into a missed field goal.

With four seconds gone in the fourth quarter, Ceasar scored again, building the Evangel lead to 19-6.

On a pass from Andrew Fowler, Gresham again broke tackles to romp 47 yards for the score. A poor handle of the snap caused a missed try for an extra point, leaving Evnagelical up, 19-12.

An Evangelical field goal put the Sentinels up 22-12 with 5:23 left in the game.

Another electrifying play saw MIA’s Tyler Wallace catch a short Fowler pass then break across the field, eluding tacklers for a 56-yard touchdown. The extra point put MIA within three points at 22-19.

A fumble recovery by Skyler Lee gave the ball back to MIA on the Evangelical 24. Austin Gross made a screen pass work for a 24-yard touchdown. With Colin McMullen’s extra point kick, MIA was in the lead, 26-22 with 4:14 left.

With MIA’s Dagan Rash recovering an Evangelical fumble on the Sentinels 28 with 2:54 left it appeared the Rays

were going to win. But a pass interception gave the ball back to the Sentienls on their own 30 yard line with 2:18 left.

Then the electrifying pass that gave Evangelical the win.

Coach Greg Fowler took the blame for the late interception that led to the Sentinels game winner.

“They had three timeouts left and thought we could score to put the game out of reach,” he said. “But Andrew’s arm was hit as he threw and they intercepted. Our guys played their hearts out.”

“I saw the ball and wanted it. I had to make something happen,” he said.

Ceasar talked about how tough MIA played on defense.

“Number 8 (Gresham), was a beast on defense and number 10 (Brian Flynn) was everywhere,” he said.

Vinnie Moeller, Wallace and Marcus Seidman also stood out for the MIA defense.

The Rays, 2-7, end their season when they travel to Shorecrest Prep at St. Petersburg at 7 p.m. on Friday, Nov. 6.