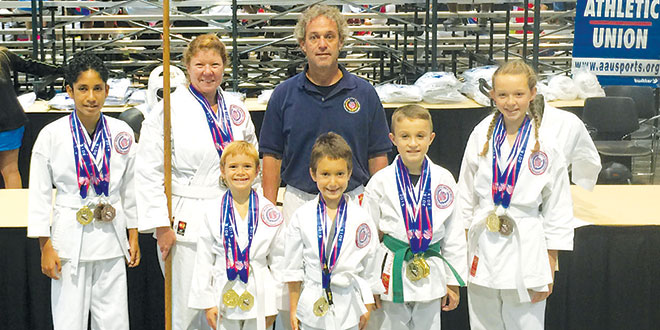 But this year, the small karate school, based at the Greater Marco Family YMCA, truly made its presence felt on a big stage by coming away with 10 gold medals in three categories at the AAU championships in just its second year of competing at the tourney.

Marco residents Logan Terreri, Chase and Kirra Polley, Bryant Martinez, Ben Warnike and Connie Rausch all earned gold medals for the dojo, the Japanese term for a martial arts school. Rausch was the only adult on the Marco squad, with the remaining members ranging in age from 6 to 12. All are members of the dojo’s Competition Team.

“They exceeded my expectations,” said Nick Lemke, the dojo’s “sensei,” Japanese for martial arts instructor, of the team’s performance in Raleigh, N.C., the location of the 2015 AAU tournament.

At the 2014 tournament, Chase Polley won two gold medals and Laurie McCardle earned one, as well as a silver medal. Lemke said the experience of attending a national tournament with more than 1,000 competitors, was an eye opener for the dojo.

“We got enlightened last year,” said Lemke. “We did really well throughout the state, but the nationals, it was rough. I always tell my students before a tournament ‘Don’t expect anything, 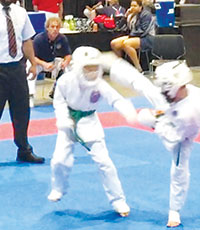 Chase Polley, right, lands a kick during the kumite portion of the 2015 AAU KarateNational Championships.

just go and do your best. We’re just here to pay these people to train with, so we have someone to spar against.’ We go into tournaments with that attitude and I think that helps a lot.”

2015 has been a banner tournament year for the dojo.

Rausch, Martinez and Chase Polley all ranked No. 1, overall, in their age groups, in Florida after the state AAU karate tourney, held in late May. Kirra Polley and Mason Mullen finished in the top five. Allison Horchler and Ben Warnike were ranked as the top performers in kata – an exercise consisting of several of a martial art’s specific movements.

Their performances qualified them for the national AAU tournament, but Horchler and Mullen were unable to attend because they were traveling on family vacations.

Rausch, 51, took gold in the kobudo – the Japanese term for the Okinawan karate weapons system, in senior-beginner division at the national championships, just 13 months after taking her first karate class.

Her expectations were minimal going into the competition.

“I just wanted to do well,” said Rausch. “I was really happy that I got gold in kobudo and I was happy that I had a competitor, because at this age, there really aren’t too many beginning women who take karate or even compete.”

Despite winning a gold medal in kata in 2014, Chase Polley, 9, also had his sights set 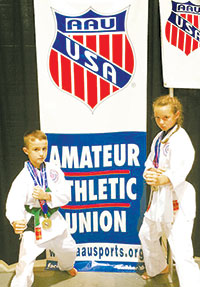 low because of the tournament’s national scope. But he captured gold medals in kobudo, kata and kumite (sparring).

“I felt proud of myself and surprised that I won, and excited,” he said of his performance.

Chase Polley has studied at the dojo for about five years and he credited Lemke with being behind his success in the martial art.

“My sensei, if he wasn’t there, I wouldn’t have won because he coaches me really well and he pushes me to go to class,” he said. “He helped me with all the categories to win gold. He’s a really good person because he always corrects us when we need it so we can win.”

“He’s very well respected,” she said. “We go to tournaments and see competitors from other schools and you can really see the difference in our katas, in our focus, in our punches, everything. He’s very detail oriented.”

Lemke founded the Shima Dojo Karate School in 2010, with a specialty in the Okinawan karate style known as Seibukan Shorin-Ryu. The dojo offers beginner, intermediate and advanced classes, six days a week, for students from age 6 through senior citizen. 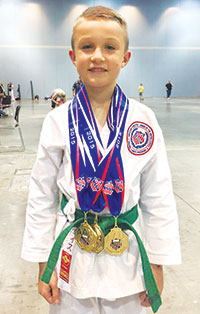 Chase Polley poses with the three gold medals he earned at the 2015 AAUKarate National Championships.

classes and standards after the instruction he experienced in Okinawa, an island located about 400 miles south of Japan.

“I don’t just give out belts like other school’s do,” said Lemke. “You really have to come in and train. I pride myself on that because it’s exactly how they would do it in Okinawa. When you finally get it, you know that you earned it. I would hate for anybody to leave my school thinking, ‘Wow, that wasn’t hard.’ ”

Bill Polley, father of Kirra and Chase, was thrilled with the dojo’s performance at the nationals, as he is with the school itself.

It’s a really good dojo here,” said Bill Polley. “It’s quality, not quantity. They’re not giving out belts just because you’ve been here a certain amount of time. It’s all about the effort and the skill, and the lifestyle.”

Lemke and Rausch said the dojo had to raise $2,600 to cover expenses for the trip to Raleigh for the nationals. Fundraising continues in preparation for the annual summer and winter training camp trips, next year’s AAU nationals and a weekend-long seminar, set for January on Marco and conducted by Lemke’s mentor, Sensei Dan Smith of Coal Mountain Karate School, in Forsyth County, Ga. To help, contact Rausch at rausch.connie@gmail.com or 317-753-5203.

For more information about Shima Dojo Karate School at the Marco YMCA, please call 394-9622 or go to www.greatermarcoy.org, click on Programs, Youth Sports.