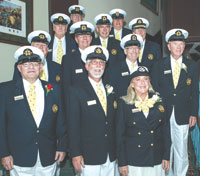 On Saturday, January 25th, the Marco Island Yacht Club held its most prestigious annual event, the Change of Watch and Commodores Ball. New officers were installed at the formal and festive event that was held in the beautiful Harbor Dining Room.

The time honored installation ceremony, Change of Watch, is a solemn naval tradition in which responsibility, authority and accountability are transferred from one person to a to another. At the Marco Island Yacht Club, it signifies the change of command as the outgoing Commodore hands over command to his successor.

Upon completion of the Change of Watch, new Commodore DeFeo outlined his vision and goals for 2014 and formally welcomed the new Bridge. Commodore DeFeo will be the official spokesperson for the Marco Island Yacht Club and will regularly attend public events on the club’s behalf. He will have responsibility for club cruises, sailing regattas, boating programs, matters relating to the Florida Council of Yacht Clubs and all social activities.

Also in time honored tradition, the wives of the new Bridge were presented with bouquets of roses, as was the retiring Sailing Captain, Lois Dixon. Past Commodores each received a boutonniere of white roses with the new Commodore receiving a red one.

A special gift was presented to outgoing Commodore Jim Marr for his leadership of the 2013 Bridge. With his theme, ”Participate and you will be rewarded,” membership grew to over 800 and the Club surpassed its financial goals.