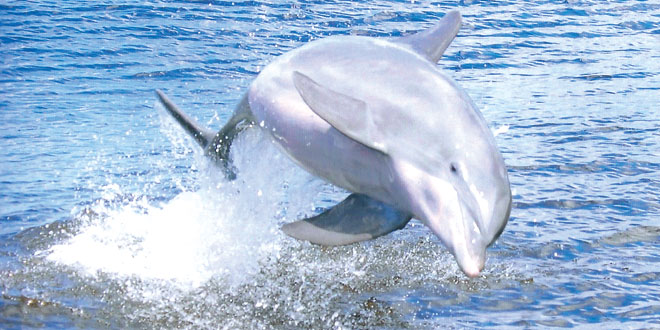 Eagles and ospreys and skimmers..oh my! Book upon book could be written about the animal and plant life here on Marco Island. Mother Nature has truly worked her magic regarding the variety of inhabitants and vegetation found here.

As previously discussed the red mangrove forest has set the stage — and the table — for a food chain that starts with micro-organisms and ends with the area’s apex predators. Let’s meet a few more locals and some migrating species in our area now.

A cry goes out, “There’s two over here! Dolphins at 9:00!” James and Kent grab their cameras, clicking away to get a good picture of the dorsal fin. With a combined 15 years experience on board The Dolphin Explorer studying dolphins in these waters, these specialists know their stuff.

They’ll tell you that these are bottle-nosed dolphins that don’t migrate from the area. The water temp here and the food supply are both stable enough to provide a good home around Marco. There are five newborn in the area for 2013, along with seven yearling and seven two-year-old calves. They know who the parents of these young ones are, who their siblings are and the pair bonds that have formed over the years. Some are more social than others and their behaviors are constantly monitored. It’s important work but fun for their guests.

The dolphin calves stay with their mom for three to four years before fending for themselves. They will feed from mother’s milk for about one year, all the while being taught how to fish by mom. Once on their own, these juveniles will form bonds with others in the area, learning the intricacies of socializing. When these sub-adults reach maturity — at about age 10 or 12 — a male usually forms a relationship with another male called a “pair bond”. The purpose here is making the search for food easier, to provide companionship and also helps in the mating process with females. It is not unusual to have a pair bond separate a female from others to eliminate competition when she is ready to mate. The adult females can begin mating at this same age and can have a new calf as often as every three years.

I highly recommend The Dolphin Explorer trip to get your dolphin fix. They are truly a stepping stone, a link between science and society.

Although the East Coast of Florida is the primary nesting destination for loggerhead and green sea turtles, we do get our share in the Marco area. New nests can be seen on the beach as early as April. A female will come ashore and dig a hole, depositing an average of 100 eggs.

Then a miracle begins. These eggs are the size of a golf ball and will incubate in the ground for about 50 days. The temperature in the nest will determine the sex of the newborns. Those eggs that are just a few degrees warmer than others will be females. Naturally, the rest are males. Those lucky enough to get from the nest to the gulf waters will experience a magnificent journey. They’ll swim out to catch the Gulf Stream current that takes them to the Atlantic ocean and up the U.S. coast. Eventually, they will cross the ocean toward Europe and then down the coast of Africa. They can cover 5,000-7,000 miles in the first five years of life, developing physically as they go.

Once in the Caribbean region, they will feed on conch and other shellfish until they reach maturity. When the motherly instinct manifests itself, the females will return to the area of their birth to create a new generation. It is believed that a substance found in

White Pelicans catch a breather in the lagoon at Tigertail Beach. PHOTO BY BOB MCCONVILLE

their brain — Magnetite — acts as a built-in GPS system to help them find the original birth beach area. Just as their predecessors did, the females create nests, and the cycle begins again. Only the females will leave the water again. The males have no need to come ashore after birth. Even though there are hundreds of nests in Collier County each year a female turtle will only come ashore to lay eggs every two or three years, so the 2014 eggs will be from different moms than those of 2013. Truly a miracle in the making!

Travelling all the way from inland North America, the white pelican is in the area now. These gracefull flyers have come great distances to winter here along the Florida coast. They are absolutely huge! They have an overall body length of 50-70 inches — nearly 6 feet — and their wingspan can exceed nine feet, second in North America only to the California Condor. Although they are seen primarily around Everglades City now, the picture here was taken at Tigertail Beach on Jan. 10.

Unlike the “dive bomber” brown pelicans in the area, the whites catch their prey while swimming, eating more than four pounds of food per day. They like to come together in groups of a dozen or more when feeding and cooperate to corral fish to one another.

They are spectacular to see flying, so catch them if you can before they head back home in March or April. Although completely white in appearance on the ground, look for the black wingtips when in flight.

Taking their name from the Latin word “peregrinus” meaning “to wander,” these raptors are a travel agent’s dream. They will engage in spectacular migrations covering very long distances. The Tundra Peregrines come all the way from the high Arctic, sometimes using this area as a respite before continuing on to South America. They can cover as much as 8,000-10,000 miles per year!

Current migratory patterns are being rediscovered since the species was brought to near extinction several decades ago. Pesticide poisoning not only hurt this species but severely damaged reproductive possibilities. Once the eggs were laid, the shells were so thin that they could not even bear the weight of an incubating parent. The Peregrine population east of the Mississippi was virtually wiped out.

Through capture and breeding techniques, the bird has rebounded well in the last 50 years, but true migratory routes are still being studied. Stepping stones!

What is truly amazing about this raptor is its hunting technique. It is the fastest animal on the planet! With extremely keen eyesight, it can spot prey at great distances. It will attack from above, projecting like a missile at speeds up to 250 miles per hour. To see during this dive, the falcon secretes a fluid in the eye to keep it from drying out. Also, its nostrils are aerodynamically designed to allow continued breathing during this process. Astounding!

In summary, we have the fastest animal on the planet visiting Marco. The bird with the second largest wingspan in North America also stops here. Non-migrating dolphins continue to grace us with their constant smiles, and sea turtles take such a fantastic journey to return to our shores. David Copperfield could not come up with a better show. Admission is free. Get out and enjoy the program.

Remember: If you come across a rock in your path it could be a stepping stone!

Bob is a Florida Master Naturalist and a member of The Dolphin Explorer’s 10,000 Island Dolphin Research Project. He is also a member of Florida SEE (Society for Ethical Ecotourism) and is a U of FL certified python spotter. Bob loves his wife very much!