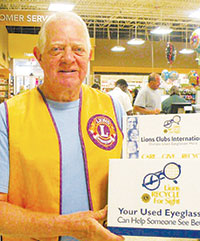 In June of 1917, a Chicago insurance executive in his late thirties named Melvin Jones, called together a group of local businessmen and suggested that they form an outreach organization for the community to do something for others. His message reached willing minds, and they very shortly began meeting for this purpose. They initially borrowed their name from a member organization called Lions, remembering that the lion, as king of the jungle, was fierce, loyal and strong. However, the name is not for an animal, but is an acronym meaning liberty, integrity and our nation’s safety. Later, at the suggestion of Helen Keller, who was both blind and deaf, they adopted as their mission to aid people afflicted with these problems.

Within three years the organization grew to international status, and today boasts hundreds of thousands of members worldwide. As of April 2015, there are over 46,000 local clubs, over 1.4 million members and are in over 200 countries.

Initially founded as an all-male organization, Lions now welcome ladies to their ranks, and if you are a member you may visit club meetings in all communities where they exist. Lions have been active on Marco Island since 1971. We meet on the first Wednesday night of each month in season, and welcome new members and guests.

Most of you know that we accept old eyeglasses, which we pass on to people in this country and abroad who might otherwise never own a pair, but that is only a small bit of what we do. We are supported only by membership dues and donations. We host a pancake breakfast each spring to raise funds. You may also have seen us outside selected stores on two dates: once in January and once in February, to collect donations from the public. This is called our “white cane day.” All monies collected from the public goes back to the public.

In earlier years we produced a Marco Island phone book. It was passed out free, except for accepted donations. It was profitable, but was stopped when other phone books appeared.

An unusual fundraiser which we tried several years ago was the introduction of basmati rice to Marco Island, before it was available in local markets. Several club members became rice salesmen, and were pursued by cooks for many weeks until our supply was exhausted.

So what do we do with our funds besides passing along used eyeglasses? We arrange medical appointments with cooperating physicians for people who cannot afford them, and have also purchased new glasses for such people on many occasions. One of our most important functions is the screening for visual and auditory defects in children, and adults as well, bringing to light many problems which might go unsuspected or untreated otherwise.

We contribute to many fellow organizations such as: Southeast Guide Dogs, Florida Lions Eye Bank, Conklin Center, Florida Lions Foundation for the Blind, Lighthouse of Collier, Lions Club International Foundation, Florida Gulf Coast University and summer camp for the blind. And we cooperate with the local school system to identify children with visual problems and suggest avenues for treatment.

We cooperate with Lighthouse of Collier to expand knowledge about visual help available in our county, and Art Bookbinder, president of Lighthouse, will be our dinner speaker at our first meeting in the fall.

You need not be blind to roar like a Lion. Most of our members are simply kind-hearted volunteers who give many hours to our group each year, and some of them have been doing this more than forty years. Some local members have earned the coveted Melvin Jones Award for their selfless work with others.

So how do you join this admirable and helpful group? Call President Joe Bartucci at 239-970-2039. Like all service clubs, we welcome new members and will roar our approval at our very next meeting.