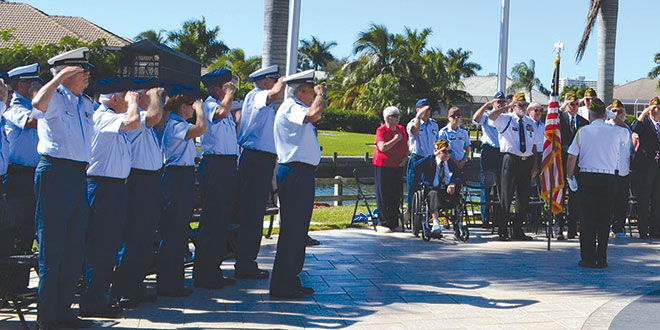 Every service man and woman raised a salute for the Pledge of Allegiance.

Marco Island loves its veterans, and that was very apparent during a number of local events scheduled to commemorate Veterans Day — Nov. 11.

According to History.com, Veterans Day was born on the 11th hour of the 11th day of the 11th month of 1918 with the declaration of an armistice between the Allied nations and Germany to end World War I. President Woodrow Wilson declared the day — Nov. 11, 1918 — Armistice Day, and it was first celebrated in 1919 with parades and a two-minute pause in the daily business activities across the country at 11 AM.

Two years later on Nov. 11, 1921, an unidentified American soldier from World War I was laid to rest in Arlington National Cemetery near Washington, D.C. This place in now known as the Tomb of the Unknown Solider. At the same time, the date was declared a legal federal holiday to honor all soldiers who fought in the Great War. Armistice Day became Veterans

TBE students remind the audience of the true meaning of the Preamble of the U.S. Constitution.

Day in 1954 when President Dwight D. Eisenhower signed legislations proclaiming November 11 to be a day to honor all American veterans.

Marco Island’s celebration of Veterans Day began Friday, Nov. 7, at Tommie Barfield Elementary its annual “A Salute to Our Veterans” program Veterans from all branches of the armed forces — Army, Navy, Air Force, Marines and Coast Guard — their families and members of the community attended.

The ceremony opened with the presentation of colors by the Lely High School Junior ROTC and the Pledge of Allegiance. Under the direction of TBE Music Teacher Lisa Braren, the fifth grade class then serenaded the veterans and audience members with a number of patriotic tunes, including a military medley that incorporated all of the traditional songs of the armed forces and a choral reading of the Preamble to the U.S. Constitution.

TBE Principal Dr. Jory Westberry and Assistant Principal Katie Maya passed the microphones around, allowing all veterans in attendance to stand and introduce themselves, and veteran and 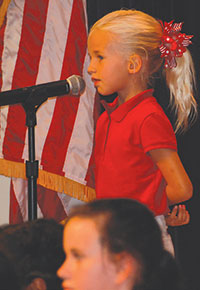 Rev. Jan Werson gave the opening prayer, and the Marco Island Strummers provided the music. During the Armed Services Medley, veterans were asked to stand and be recognized when their branch’s tune was played. VFW Post Commander Dave Gardner officiated, and he was a jokester. He said (away from the microphone, but still audibly), “At our age, if we can recognize our tune, we deserve another medal.”

“Our armed forces have a long-standing record of triumph over evil. 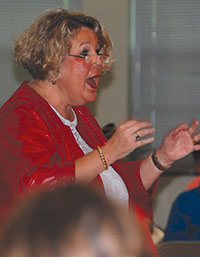 Our veterans are an extraordinary group of Americans, the less than 1 percent who commit to something more than the other 99 percent; they deserve our lasting gratitude and respect,” said Polverari.

The ceremony closed with “God Bless America” led by Herb and Emily Savage and a prayer by Pastor Kirk Dreiser.

The grand finale of Marco Island’s Veterans Day festivities was held later in the day, though, at the Marco Island Historical Museum. It was standing room only at as artist Malenda Trick’s “Sea to Shining Sea” mural was unveiled.

Trick put the first paint strokes to canvas back in July, and the Tuesday evening ceremony celebrating the completion of the long-awaited venture drew a crowd that numbered more than 250 attendees.

“This was an amazing, epic project, like nothing I could ever have imagined, and it was a project after everyone’s heart because people don’t talk enough about their war stories,” said Kat Nimtz Rinaldo, Trick’s friend and project director. “Malenda was on a mission. She throws her

heart and soul into everything that she does, so this wasn’t any exception.”

Trick said that the number of participants who helped bring this piece to life is immeasurable, and her husband, Clark Shaw, estimated that his wife put in at least 300 hours of work on this undertaking.

“I’m impressed! It is absolutely gorgeous; it’s some of her best work, but I hope she doesn’t do it again. It’s just too hard on her,” said Shaw.

“I can’t believe the participation we had! The people are what this is about, and those that signed the mural are back tonight for the unveiling. We’ve tried to represent all of the armed forces; this project really encompasses Florida,” said Trick.

As the evening’s proceedings came to a close, Trick’s excitement couldn’t be contained. As soon as the last speech concluded, she ran to unveil her mural for the crowd to see. The work of art will leave the museum Thursday, Nov. 13, and travel to its next temporary home at the Naples Airport where it will be displayed for viewing.