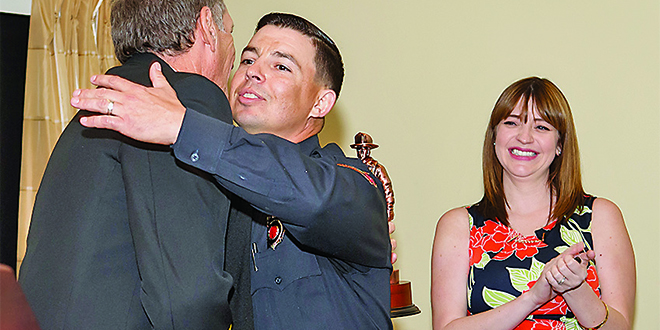 Photo by Frank Steiger |Firefighter of the Year Grady Harrison gets a hug from Fire Chief Mike Murphy, as his wife Allie looks on.

MIFRF President, Dianna Dohm opened the ceremony with a reminder: the Marco Island Fire Rescue Foundation’s main goal is to provide financial support to island firefighters should they or their families need it.

“This year we have responded to several situations where local firefighters needed assistance,” said Dianna Dohm. “One case involved a young couple whose child was born with a severe heart defect requiring weeks of hospitalization on the east coast of Florida.”

The foundation helped and will continue to help the family financially in order to cover home costs while they care for their child.

Their mission, Dohm continued, also includes community education. Foundation members recently toured Collier County’s 911 center to learn about Smart911, a newly available service in our area. Smart911 allows residents to provide 911 with critical medical or household information such as preexisting conditions or house access points. In the case of an emergency, first responders will have access to that information, allowing for more efficient care.

“The foundation plans to take a lead in educating the community on how to provide secure information to the 911 call center,” said Dianna Dohm.

In 2016 the foundation also held their annual Jerry Adam’s Chili Cook-off Event, two Pancake Breakfasts events, and a 50/50 raffle at Stan’s Idle Hour in Goodland. The foundation provided $6,000 in educational scholarships to the children of Marco Island firefighters/EMTs.

“The annual Cruise Raffle and a generous grant from the Island Country Club helped fund the account for this year’s students and future scholars,” said Dianna Dohm.

The next official order of business was the swearing in of the 2017 Fire Recue Foundation officers. Marco Island City Council Chairman Larry Honig performed the honors, installing Dianna Dohm as president, Barbara Murphy as vice president, Cheryl Ferrara as secretary and John Coff as treasurer.

Marco Island Fire Chief Michael Murphy then took to the stage where he expressed his gratitude for the foundation. He went on to summarize some of the fire departments achievements from the last year as well as future projects, such as the imminent opening of a temporary fire station in place of Fire Station 51. In July of 2016, Fire Station 51 was struck by lightning, causing a damaging fire. Chief Murphy also touched on other programs newly instated by the fire department.

“2016 was a very interesting year for us. It’s hard to believe that we actually responded to 3,571 911 calls on Marco Island. People find that statistic staggering,” said Fire Chief Murphy in his opening address.

Chief Murphy then officiated the pinning of the badge ceremony, a longstanding tradition in the fire service in which newly hired or promoted firefighters/EMTs are pinned by someone they admire or respect.

The Marco Island Fire Department has a one-year probationary period for new hires. Brian Asbell successfully completed his one-year and is now a firefighter/paramedic. He was pinned by his father Robert.

As the ceremony came to a close, it was time to announce the most important award of the year, the Firefighter of the Year.

This year firefighter/paramedic Grady Harrison took home the title. Grady began working for the Marco Island Fire Department in 2015. In two short years he was able to create and implement the Marco Island Fall Prevention Program. He did this by doing an analysis of falls. He was then trained in reference to falls. By looking at local data he was able to figure out who the fire department was being called out to assist and how frequently. He decided to revisit those people to check up on them and advise them on how to prevent future falls.

“He actually proposed a system to Collier County about helping seniors when they’re in need,” said Chief Murphy. “He came to Marco because he felt he could make a difference and actually implement that program.”

Besides his Fall Prevention Program, Grady also teaches CPR classes at the station. Recently he was awarded the 2016 Johnson School of Business Bachelor of Management Student of the Year.

“I’ve been overwhelmed by the support that I’ve received,” said Grady Harrison. “I’ve never seen such an active, engaged group of community members.”