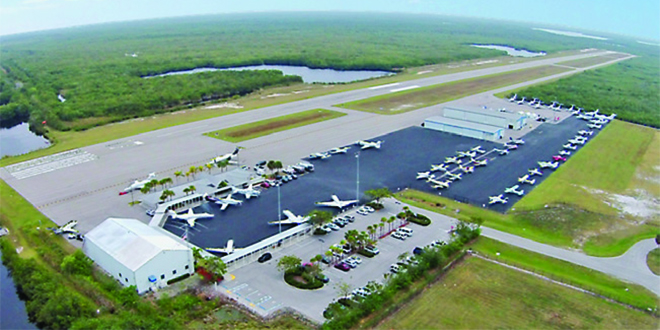 Our local general aviation facility, situated just north of Marco Island, has come a long way since the first planes touched down on a then “brand-new” airport exactly 40 years ago. Many local residents are surprised to learn that the current airport was actually privately constructed by the Deltona Corporation, a company responsible for much of the modern development of Marco Island, to replace a smaller facility that was located alongside South Collier Boulevard on the island itself. For many years, the now defunct Marco Island Airways flew thousands of people to the area, many of which were looking to purchase homes on Marco. As time went by, ownership and operation of the airport was transferred to Collier County.

Today, the Marco Island Executive Airport (KMKY) serves a crucial purpose in the local economy, which provides not only a gateway for tourists looking to escape the harsh northern winters, but also as a place for young “eagles” to earn their wings as they aspire to become commercial pilots. Locals can also charter a flight to the Keys, or simply “Island Hop,” with two of our based air charter operators. In addition, the Marco Island Squadron of the Civil Air Patrol (CAP) provides a critical service to the public, which includes search and rescue, and disaster relief operations. Need a rental car? We have that covered too! Although the airport serves a large number of “private” corporate jet operators, our unique services and based operators are very much available to residents of the local community.

Over recent years, the Marco Island Executive Airport has seen several significant improvements, to include construction of a full-length parallel taxiway and a complete rehabilitation of the decades-old runway. Perhaps the most exciting improvements are just around the corner! The Collier County Airport Authority is set to embark on a project to replace the current terminal building, which is located within a close proximity of the active runway, at a new location approximately 500 feet west of the current structure. The new, state-of-the-art terminal building will be two-stories tall, with sufficient space to meet anticipated future demand with the continued growth of Marco Island and East Naples. The project will also create additional space for aircraft parking and much-needed hangar development. The design phase is underway, and the groundbreaking is expected in the fall of 2017.

It is an exciting time for not only the airport, but also for the communities of East Naples and Marco Island. If you have not yet visited the airport, I invite you to come see us, and follow our progress as we move towards the future.