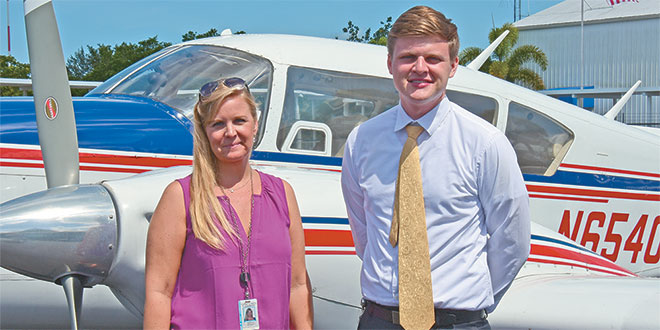 Our local airport is a unique destination, an exception to most of the rest of the world of air transportation. Normally, the 3-letter code for an airport in the USA is designated by the FAA (Federal Aviation Administration) and IATA (International Air Transport Association) is the same 3-letter code for both organizations. Not so for the Marco Island Executive Airport. The FAA gave it the code: MKY, but IATA recognized they could not do that because MKY is the code for Mackay Airport in Queensland, Australia. Thus our more familiar and logical: MRK from IATA.

In the very beginning of the history of the development of Marco Island, airplanes bringing visitors and investors would land on a dirt strip on what is now Landmark Street, parallel to Collier Blvd and close to what is now the Marriott Resort. In 1976 the developers built a real airport, today with an expanded runway of 5000 feet, four miles northeast of the island. It was intended to build a resort area there and offer it as a focal point for people traveling to Naples, Marco Island and Isles of Capri.

Due to environmental concerns, the resort area was never developed and the airport was turned over to the state by the developers. Around 1980 the state leased the airport to the county. It was decided that the airport would be a valuable community asset and thus the property was maintained by the county. It was good foresight on part of Collier County as the Florida Department of Transportation estimated last year the local economic impact of the Marco Island Executive Airport on the area is over $27.6 million yearly.

Justin Lobb, the young and enthusiastic airport manager, hopes those figures will increase further as Marco Island, and especially East Naples, keep growing by leaps and bounds. In order to be prepared for this growth there are brand new plans for an $11 million extension. Kate Whitson, the Airport Operations Manager, explained that in the winter it gets so busy that they have to park planes too close together and Justin added that today the airport terminal is too close to the runway. The new two story terminal building will be constructed 500 feet west of the present terminal. A new hangar has already been approved. It is expected that the design phase will begin in October of this year and construction is planned between late 2017 and the end of the following year. Funding is handled by the FAA and DOT.

When my family and I first moved to the island, Marco Island Airways provided a scheduled service between Miami and Marco Island twice daily. I remember the clean gleaming white aircraft with the green and blue logo and hostesses who were dressed the part, and it was a sad day when they closed their operation in 1986 after a last stint trying to operate with Province-Boston Airline. I asked Justin and Kate if they see any scheduled service in the near future. “Raven Air tried it last winter with daily flights to Key West, but FAA hurdles delayed everything until the winter season was over. We are competing with the very well operated and convenient airport of Ft Myers.” Kate, who is a third generation pilot since she was a child, was quick to mention that the airport offers excellent charter services year around.