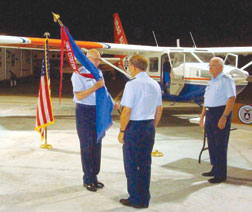 The ongoing success of the Marco Island Squadron is the result of hard-working members combined with skilled leadership. As a result the current commander Lt Col Ray Rosenberg has been promoted to Commander Group-5 Florida Wing, Civil Air Patrol. Group-5 encompasses the southwest Florida area from Sarasota, Sebring and south to Naples and Marco Island; it includes eleven Civil Air Patrol Squadrons.

Rosenberg who had led the Squadron since 2010 accomplished a great deal, including the growth of both senior membership and the cadet program, while providing vital services to Marco Island, and Southwest Florida. During his command the Squadron had major participations in the Gulf Oil Spill, USAF Intercept missions, and other search-and-rescue and homeland security assignments.

The Rosenberg promotion triggered the need for the selection of new squadron commander. Capt. Robert S. MacNeill, Jr. was nominated and selected as the incoming CAP commander.

Lt Col Rosenberg served as Master of Ceremonies and opened the Change of Command Ceremony with a welcome and led the Pledge of Allegiance. He introduced the honored guests who included USCG Auxiliary Flotilla 95 Commander John DeFalco, and Past CAP Squadron Commanders Lt Cols Lee Henderson, and Lee Frank

Col Robert A. Berlam (USAF Ret.) conducted the Change of Command Ceremony in which the flag was passed from the outgoing to the new commander, who each then made remarks.

The new commander, Capt MacNeill, was a helicopter pilot in the United States Marines for 4 years. He served in Vietnam and flew 650 missions, a very noteworthy amount. He has 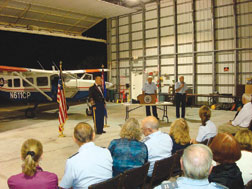 an MBA from Harvard and worked in the pharmaceutical Industry in management roles.

His roles in the Civil Air Patrol are numerous. As a pilot he is a Certified Instrument Flight Instructor providing training to Florida Wing pilots He served the local CAP Squadron in the area of Special Operations, flying during the Deep Water Horizon oil spill tracking from the air the movement of the oil and then transmitting it to the US Coast Guard for action.

The Marco Island Squadron works with the Florida Air National Guard in their training for national defense and homeland security. Capt MacNeill has completed 35 intercept missions in the last three years and has participated in at least 28 counter-drug sorties with Marco’s squadron plus many other missions which required a high degree of skill in the art and science of instrument and night flying.

In addition to the actual change of command ceremony, special awards and recognition were presented to several other members of the Marco Island Squadron.

Civil Air Patrol, the official auxiliary of the U.S. Air Force, is a nonprofit organization with over 60,000 members nationwide. CAP performs over 90 percent of continental U.S. inland search and rescue missions as tasked by the Air Force Rescue Coordination Center and was credited by the AFRCC with saving 113 lives in fiscal year 2010. Its volunteers also perform homeland security, disaster relief and counter-drug missions at the request of federal, state and local agencies. The members play a leading role in aerospace education and serve as mentors to the more than 23,000 young people currently participating in CAP cadet programs. CAP has been performing missions for America for 70 years. For more information on CAP, visit www.gocivilairpatrol.com