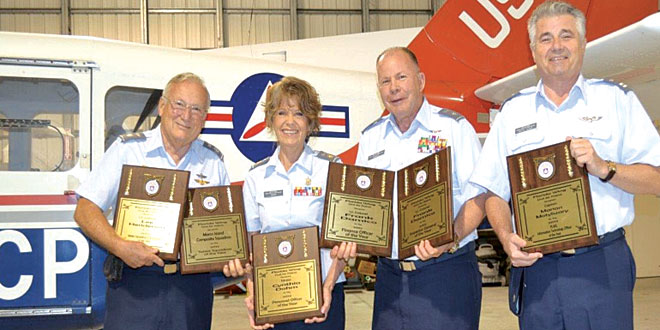 The Florida Wing of the Civil Air Patrol held their annual statewide conference in Orlando two weeks ago.  The two days of meetings and workshops for Florida CAP volunteers was closed with the Awards Ceremony and banquet.  The Marco Island Squadron was honored with the designation of the “Outstanding Squadron of the Year” for 2012, presented by Florida Wing Commander, COL Michael Cook.  The Marco Island Squadron Commander, LTC Lee H. Henderson was designated the “Commander of the Year” for the Florida Wing.

Being the number one CAP Squadron in Florida does not happen by accident according to LTC Henderson, and he recognized his staff was the key for the overall success in Marco.  LTC Frank Damico was designated the Outstanding “Finance Officer” of the year and Major Cynthia C. Dohm was honored as the “Personnel Officer of the Year”.  Both Dohm and Damico serve as inspectors for other CAP units statewide and LTC Damico had the additional honor of being chosen the “Inspector General of the Year”.  Captain Marian I . Motylszary was chosen as the Information Technologies Officer of the year.

The Marco Island Squadron, headquartered at the Marco Island Executive Airport, will host an Open House on the tenth anniversary of the dedication of their Hangar / Headquarters on Sunday May 18, 2013 at 2 PM.  The awards will be prominently displayed along with the aircraft flown by the Squadron, their radio room and the office / hanger.

Civil Air Patrol, the official auxiliary of the U.S. Air Force, is a nonprofit organization with more than 61,000 members nationwide, operating a fleet of 550 aircraft. CAP, in its Air Force auxiliary role, performs 90 percent of continental U.S. inland search and rescue missions as tasked by the Air Force Rescue Coordination Center and is credited by the AFRCC with saving an average of 80 lives annually.

Its volunteers also perform homeland security, disaster relief and drug interdiction missions at the request of federal, state and local agencies. The members play a leading role in aerospace education and serve as mentors to nearly 27,000 young people currently participating in the CAP cadet programs. CAP received the World Peace Prize in 2011 and has been performing missions for America for 71 years. CAP also participates in Wreaths Across America, an initiative to remember, honor and teach about the sacrifices of U.S. military veterans. Visit www.gocivilairpatrol.com or www.capvolunteernow.com for more information.