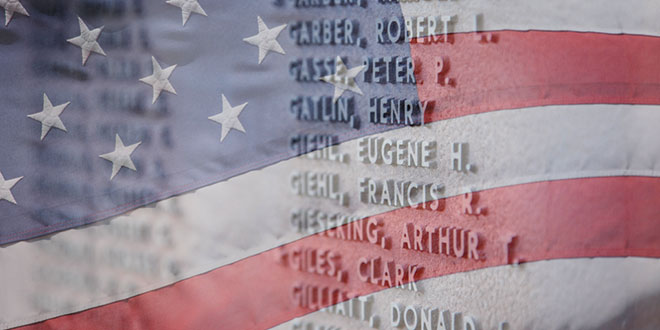 Mark your calendars. The traveling Vietnam Veterans Memorial Wall is headed back to Marco Island for a repeat exhibition Feb. 11-16, 2015. Dubbed “The Wall That Heals,” the wall first came to the island in December 2011 and was visited by more than 16,000 people in four days.

“This is probably the most honorable thing that could happen to Marco Island,” says Lee Rubenstein, current commander of the American Legion Post 404-Marco Island and the person responsible for bringing the wall back. “To be chosen a second time is quite an honor.”

“The Wall That Heals” is a half-scale replica — about 250 feet long — of the Vietnam Veterans Memorial in Washington, D.C. It is complete with the 58,286 names of those killed or missing in action from the conflict. It is constructed of powder-coasted aluminum, supported by an aluminum frame and is made up of 24 individual panels, each containing six columns of names.

The original memorial is the result of three-and-half years of hard work on the part of the Vietnam Veterans Memorial Fund (VVMF) and Jan C. Scruggs. Beginning in 1979, Scruggs and a number of other veterans and supporters worked to convince Congress to give a three-acre plot of land on the prestigious National Mall for a memorial dedicated to honoring those service members who served in Vietnam. Work began on the site on March 26, 1982, and the memorial was dedicated on Nov. 13 later that same year.

VVMF raised $8.4 million entirely from private donations from more than 275,000 individuals, veterans and civic organizations, corporations, foundations, and unions to fund the memorial. No federal funds were used.

The design for the wall was chosen from 1,421 entries in a national design contest. Athens, Ohio-born Maya Lin’s design was chosen. She created it as an undergraduate at Yale University for a funerary architecture class. Throughout her career, Lin also designed the Civil Rights Memorial in Montgomery, Ala., and the Wave Field at the University of Michigan. An Oscar-winning documentary entitled “Maya Lin: A Strong Clear Vision” was made about her in 1995.

The traveling memorial has three components: the wall, the information center and the traveling museum. The names on “The Wall That Heals” are listed alphabetically by day of casualty, as they are on the original memorial. Visitors begin their journey at the center of the wall with the names extending to the right and picking up again at the far end of the left-hand side of the wall. Thus, the beginning and ending of the conflict are joined at the center.

The Information Center consists of a 20’ x 20’ white canvas tent where visitors can access many of the resources of www.vvmf.org as well as a variety of other materials, maps and resources. Visitors are encouraged to bring photos of friends and Vietnam veterans on The Wall to be scanned for inclusion in The Education Center at The Wall in D.C.

The final component — the Traveling Museum — is housed in the 53-foot trailer that carries and delivers The Wall, and is a mobile representation of The Education Center, previewing key elements of the center. It includes the Wall of Faces, a sampling of the 120,000 artifacts and remembrances that have been left at The Wall, and a map and timeline of the Vietnam conflict and history of the memorial.

be one of the first stops of the 22-city 2015 tour of “The Wall That Heals,” and Rubenstein is looking forward to its arrival. He remembers the five-mile-long motorcade that brought the wall to Marco in 2011.

“Last time it came, they had every entrance and exit ramp along I-75 closed for this escort,” he recounts. “There were veterans groups that ride motorcycles, and people were lined up on the Jolley Bridge. The motorcade was as far up 951 as you could see from Marco.”

Rubenstein believes his application to bring the wall back to Marco Island was accepted in large part due to the generosity of Marco residents when it was here four years ago. While at a venue, donations are accepted in decorative donation boxes to help keep the wall traveling. Nationally, the average donation for people that walk up to the wall is about 28 cents per person. In 2011, Marco Islanders donated an average of $1.27 per person — five times the national average.

According to Rubenstein, it costs roughly $15,000 to bring the memorial to Marco and man and operate the exhibit 24 hours a day for its four-day stint, including a $5,000 fee to the VVMF. Local philanthropists already have stepped up to help out, including one anonymous donor who is covering the fee to VVMF.

Additionally, Affordable Landscaping has offered to provide landscaping for the exhibit, and the Marco Men’s Club and Marco Island Softball League will be on hand to help set up the memorial. All told, there are about 15 people on the committee to bring the memorial to Marco Island, and each one has a specific job, as well as a platoon of 12-15 people working under them to make it happen.

The Marco Island exhibit will incorporate extra elements as well, including a Vietnam-era helicopter, grief counselors and a traveling exhibit from the Museum of Military Memorabilia in Naples. One day will be dedicated to education, encouraging middle and high school students to come visit the memorial, and Rubenstein says that the names of the 1954 Floridians killed in Vietnam will be read again as they were during the memorial’s first visit over a three-day period.

“That took three days to do. We had group of 20 people who did it, and they read more than 600 names at a time. It was probably the first time that these names were said in public since they died. Their names were not forgotten,” he says.

While Rubenstein, who served in the U.S. Army, 1965-1968, did not go to Vietnam, he remembers the controversy and poor treatment of Vietnam vets upon their return to the United States. Still, he believes the current wartime conflicts have helped teach people the importance of treating veterans with respect and honoring their sacrifice. In fact, he says, that is why the anonymous donor provided the $5,000 to help bring the memorial to Marco Island. Donations are still needed.

Says Lee: “He told me, ‘Lee, I am so helpful because I am so grateful my name is not on The Wall. I was so close to being drafted, and if they had called my number, I might not have come home. There is someone’s name on that wall that could have been mine.’”