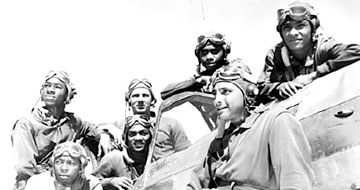 The Marco Island Center for the Arts is proud to announce that Tuskegee artist and historian, Mr. Clint Martin, and Tuskegee pilot, Lt Col. Leo R. Gray, USAF Ret., will be a focal point for the gallery opening of Salute To Service: America at War, on November 8, 5:30PM-7:30PM. It is free and open to the public; donations are welcomed.

The exhibition will be open through the month of November; it blends war memorabilia and original paintings, both from local veterans, their families and local artists. Elaine Michaelis of Marco Island has led the gallery committee on collecting memorabilia from a number of wars in which the United States has been involved, including but not limited to conflicts going back to the Civil War. Actors in uniforms will be at the event to lend to the atmosphere.

Mr. Clint Martin lives in Mississippi and is an artist and historian for the Tuskegee Airmen of WWII. He has donated prints of his work to the Arts Center, which will be for sale, as well as an original painting of one of the planes flow by the Tuskegee Airmen. It will be unveiled that evening. Mr. Martin also served as an historical consultant on the HBO movie Tuskegee Airmen.

At the event will be Lt. Col Leo R. Gray, USAF, Ret, who flew single-engine planes in Italy during WWII. He was interviewed and consulted by George Lucas for the upcoming movie, Red Tails, starring Cuba Gooding, Jr., which opens in theaters December, 2011. Col. Gray lives on the East Coast of Florida.

Col. Gray will offer a private talk at a luncheon at 12:00 noon on Wednesday, November 9, at the Marco Island Hilton. Reservations are required, the cost is $50 and seating is limited. Contact the Art Center for more information.

There are only about 44 Tuskegee pilots who are still living who actually flew combat during the war in Europe. They were called the Red-Tail pilots, which was their designation because the tails of their planes were painted red.

“We are honored that these men accepted our invitation to visit the Marco Island Center for the Arts, and to help us with our exhibition Salute To Service,” says Lynn Holley, Executive Director. “There has been nothing quite like the scope of this event in the Marco Island/Naples area. We are combining memorabilia with current paintings by artists, coupled with a visit by an elite and very select group of national heroes. We are excited that we can contribute at such a high-level of patriotism for the beginning of the week that leads up to Veterans Day this year on 11/11/11.”

The Tuskegee airmen were made up of the 332nd Fighter Group and 477th Bombardment Group. They were the first squadron of African American pilots in U.S. history, and considered to be some of the best in the world. In 1941, in Tuskegee Alabama where racism was prevalent and the U.S. military was segregated in accordance with Jim Crow Laws, this core was formed. These pilot-soldiers had to face adversity both at war in the air, and at home, yet they prevailed. They fought nobly for their country and ardently for their civil rights as Americans.

Lt. Col. Leo R. Gray, USAF, Ret. made significant contributions to the warfare of this country throughout his military and civilian careers. Soon after high school graduation, Lieutenant Colonel Gray joined the Army Air Corps and began his aviation cadet training in 1943. Little more than a year later he graduated from the Tuskegee Army Air field as a Second Lieutenant, single engine pilot. While stationed in Italy as a fighter pilot, Gray flew 15 combat missions in P-51s for a total of 750 hours flying time. He left active duty in 1946, but remained in the USAF Reserves until 1984. During his 41 years of military service, Lieutenant Colonel Gray earned a Coveted Air Medal with one Oak Leaf cluster and a Presidential Unit Citation.

Mr. Clint Martin, an aviation artist and model builder has been associated with the Tuskegee Airmen since 1972. The self-taught artist has work exhibited in 17 museums, including the Camp Shelby Military History Museum, Mississippi Museum of Art, the Pentagon and the Smithsonian. Martin’s uncle was one the original fighter pilots and Martin’s interest in the historical significance of the airmen led him to begin painting.

“The artwork that is depicted on the canvas are based on stories of the airmen and true historical accounts of missions they were sent out on,” says Martin. After retiring as a dentist, Martin decided it was time to do the things he had always wanted to do, which was to build model airplanes. The more he learned of the airmen the more he wanted to record historical missions and events to canvas. Using acrylic and ink, Martin details the planes, bases, and battleships to resemble their true form.

“My love for these guys has inspired me to do this thus far,” said Martin. “I only attempt artwork with historical background.”