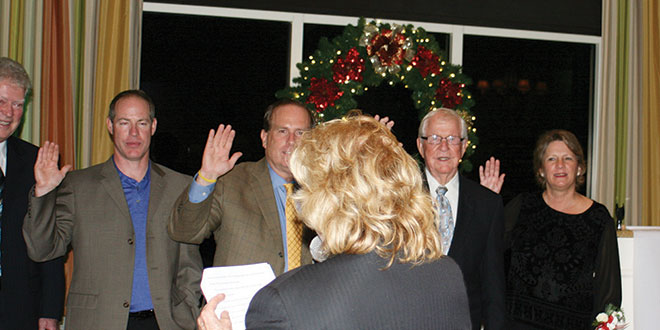 Donna Fiala swears in the new Board of Directors. SUBMITTED PHOTOS

Marco Island realtors celebrated the season and installed their 2015 officers and directors last week during an elegant dinner and awards presentation at Hideaway Beach Club. Susan Ackerson accepted the gavel as the organization’s incoming president, a position she also held in 2010.

“It is such an honor to have the opportunity to serve this association as your president…I know that we have work to do; it will go smoothly because of the people involved. The directors and officers of this association are dedicated to making the right decisions that are fair to all involved,” Ackerson said. Among her goals for 2015, Ackerson urged her fellow realtors to become more politically involved, especially when it deals with private property rights. She also wants to see local realtors become more involved in business 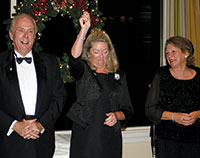 Bette adjourns her year as president with Bill Filbin and Susan Ackerson.

issues and create a “greater awareness among our realtors of our environment.”

“I would like our Professional Development Committee to seek out ways that our realtors can be good stewards of our environment through volunteerism locally. We are, after all, the 2014 number one island in the US because of our beautiful environment.” In her closing remarks, Ackerson invited members who have been on the sidelines to become more active in the association. “We need to facilitate new members stepping up to leadership roles. When it is possible, it is important that we look for ways to nurture our future leaders.” 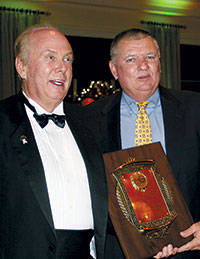 Realtor of the Year presented by Bill Filbin to Jim McGregor.

Island Marriott expansion and the drafting of a rental ordinance through a realtor-led task force are several accomplishments noted in 2014 under McGilvray’s leadership.