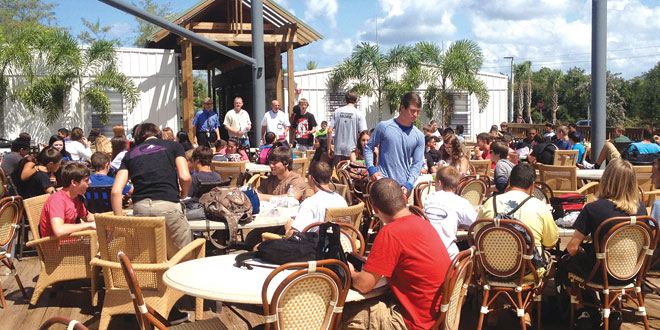 Marco Island Academy has reason to celebrate this school year.

Since its inception in 2011, the charter high school will see its first set of senior students graduate. This major milestone has set in motion a series of gainful changes and is squashing some serious challenges.

As MIA has aged, so has its grade level offerings. Three years ago, the school opened its doors to freshman and sophomores. The following year added juniors, and this year, finally the seniors. “Quite a few of our graduates have been here since the beginning,” beams MIA Board Chair Jane Watt. “We have about 20 seniors graduating. It’s just so exciting to be a part of something that is so much bigger than you. It makes all the obstacles seem worthwhile.”

Watt is also excited to finally have an office at the school. The new location has afforded space for the board chair who had been working out of her home for many years. “It’s great to finally be here on campus every day interacting with the students and getting to know what they need and what works for them. Not to mention that my daughter will be a freshman here next year, so I’m looking forward to seeing her more often.”

But Watt knows its more than just mingling with the minors. The school’s numbers have jumped from 102 students last year to 170 this year. With room for six more modular 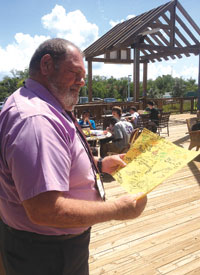 The close-knit school presented a card to Principal GeorgeAndreozzi on his birthday, signed by all his students. PHOTOS BY NATALIE STROM

units, it looks as though MIA may need to expand sooner than expected.

In it’s first full year at the 2255 San Marco Road location, modulars have been filled with high-tech classroom equipment including tech boards, smart boards, iPads and tablets. “There is no individual tech class, but it’s being used in all the classrooms,” explains Watt. As well as the main office. A flat screen T monitors each classroom via camera.

MIA’s 2013 FCAT scores encouraged the board to hire on two extra math teachers as the school fell just one point shy of the state average, receiving a score of 392 to the state’s 393.

Through the FCAT and end of school testing, the 2012 school year earned MIA a C rating. According to Watt, the one point difference in algebra dropped the school’s rating to a D for 2013. “I was so upset when I found out, I can’t even tell you,” says Watt. “And then I started researching 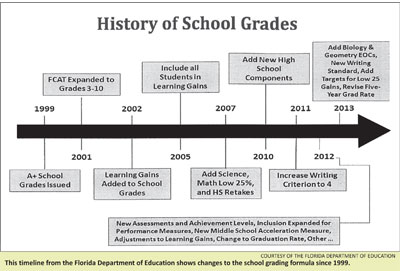 the grading system more. I even felt the C rating was not an accurate reflection of our school.”

According to Watt, because the school did not have a graduating class, MIA’s grade was actually determined based on the elementary school criteria – not even based on middle school ratings as eighth graders are considered graduates. “Other high schools are on a larger point scale and they receive points for AP and AICE classes, number of graduates and other opportunities to gain a better grade. I’m not saying these schools aren’t doing a good job, they’re just being rated differently.”

Case in point, MIA’s 2013 D rating was released at the end of July – the same time as the elementary school grades were published. Yet all other Florida high school grades for 2013 have yet to be released.

Watt first considered appealing the grade, “but the state is very aware of the problem [of its rating system], so instead we are going to look forward.”

“Education is such a complicated matter. Getting everyone from the state level down to work together often times means it’s not always focused on the best interest of the students, and it’s not one person’s fault.”

It is no secret that the FCAT has faced much scrutiny as to its accuracy of the student’s understanding and the teacher’s competency. The state of Florida has further complicated 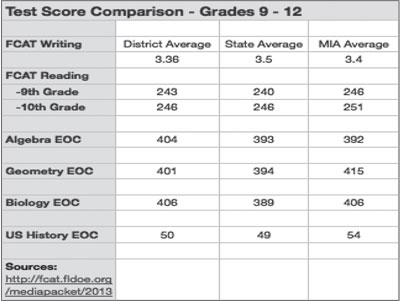 the issue as it frequently changes criteria regarding scores and school grades. “It’s like a moving target,” adds Watt.

Just as Watt describes, the target is once again changing. Florida has begun to implement the Common Core State Standards technique utilized by 44 other states and Washington D.C. The FCAT will vanish and a new test will take its place. The test, however, is yet to be decided; the 2014 school year students will be the first to take the new test.

Still, Watt and MIA are taking earnest steps, hoping to gain something positive from the FCAT scores, and adding an extra algebra class to focus on raising the grades of its bottom 25 percent.

While test standards will once again change, MIA’s greatest advantage is its graduating class and those of the future. “With our graduates, our AICE classes and other factors will count that didn’t before. And our algebra scores will improve by identifying the students with the most needs and catering a class to them.”

“These are all challenges, but we always look to find the good and always look to learn a lesson. We are not happy about the grade, nor do we feel it is reflective, but next year,” smiles Watt, “next year, our scores and our ratings will look really good.”

To learn more about Marco Island Academy or to make a donation or naming right to the charter high school, visit www.marcoislandacademy.com or call the school at 239-393-5133.