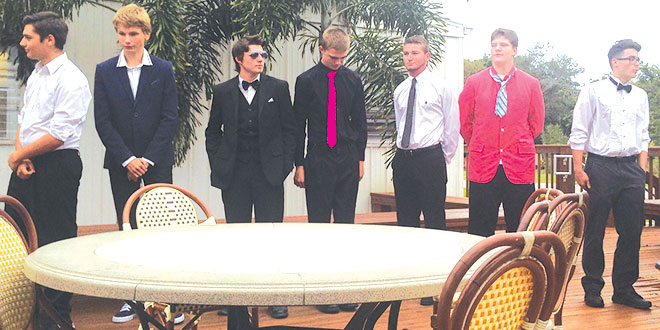 Contestants for the Mr. MIA Pageant line up before the show. SUBMITTED photo

In August 2014, the Marco Island Academy Manta Mentoring group, along with mentor Mr. Kirby Rients, considered creating something out of the time between lunch and classes together as a group. Mr. Rients knew he wanted to construct a mentoring group that would achieve great things, instead of neglecting this 20-minute period.

So, with the brains of the students in the group and the suggestions from Mr.Rients, the Marco Island Academy Charity Bash was established. The MIA Charity Bash was created to raise money for a charity of the students’ choice, the American Cancer Society. Since August, we’ve been contemplating new ideas to raise money, and thus far have produced two events creating a great start to our fundraising.

In the past two months, Mr. Rients and the mentoring class have put together the first Marco Island Academy talent show, which was a huge success. More than 60 people attended the show, raising roughly $200.

With the charity bash starting off with a bang, it was time to move on with further events. In the past month, Mr. Rients’ mentoring group joined with guidance counselors Mr. Chris Zumstiens’ mentoring group, consisting of about 30 students, to produce also the first Mr. MIA Pageant.

With two fundraisers down, the MIA Charity Bash is looking towards a bright future. By creating the Charity Bash, we are hoping to not only raise money for a valuable cause, but as well to create a mindset that students can achieve whatever they set their minds to if they try their hardest.

“Our ultimate goal is to raise $5,000 by the end of April,” says mentor Mr. Rients. “Our second goal is to raise awareness as well as display the selflessness high school students can show.”

By putting on fundraisers, we are hoping to get the community involved as well. “Throughout the school, the Charity Bash is all inclusive for any student, and we encourage the rest of the school to become involved,” says Mr. Rients.

As for the future of the charity bash, Mr. Rients says, “As a group, we’ll have to brainstorm for new fundraisers.” In addition, the April Relay-for-Life event will be an around-the-world theme, in which MIA will be representing the country of Greece. We will be looking forward to exciting fundraisers that the community is more than welcomed to participate in.

Marco Island Academy is looking toward a positive future of the Charity Cash and hoping we’ll reach our goal of $5,000. In the meantime we’ll be constructing more exciting fundraisers. As we count down the days till April, we’ll be counting on our mentoring students to draw us closer and closer to our goal.