Marco Hilton to Get Facelift 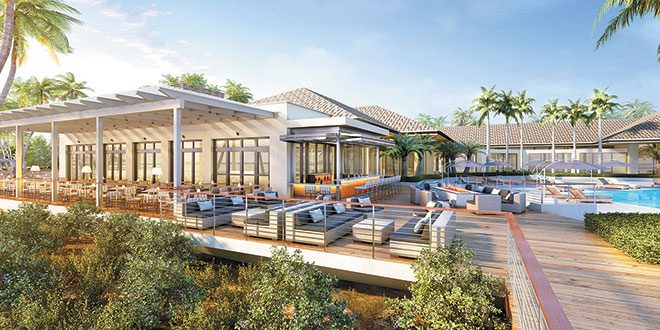 A rendering of how a portion of the Hilton Marco Island Beach Resort & Spa’s pool area will appear, post-renovations. Submitted Photo

The Hilton Marco Island Beach Resort & Spa’s $40 million renovation and expansion project is a plus on many levels, according to Bob Brown, chairman of Marco Island City Council.

“Any time one of the major hotels in the area does any renovations, it benefits not only them, but tourists, residents, the community as a whole. Certainly the Hilton brought forth a site development plan that shows they’re very committed to make the hotel one of the best the area.”

“Ultimately, it will be a great improvement, as we’ve seen with some other facilities here on the island,” he said. “The Hilton is always getting its AAA Four Diamond Rating. Mac (Chaudhry, the general manager) does a great job running the Hilton and entertaining their guests. Even with the Four Diamond awards, they’re still reaching out to improve.”

The luxury resort’s owner, Olshan Properties, recently announced that the hotel will close from June through mid-October to expedite what its CEO, Andrea Olshan, described as a “broad-reaching transformation that reimagines the Hilton Marco Island as the resort of first choice for all those seeking luxury accommodations, unsurpassed amenities and a warm welcome on Florida’s Gulf Coast.”

Among the project’s component parts are adding 23 suites to increase the room count to 310, along with replacing current dining options with two new restaurants. One will offer casual elegance and unobstructed views of the Gulf of Mexico from its outdoor seating. There’ll also be a less formal eatery featuring Hilton’s “Herb N’ Kitchen” gourmet marketplace. That restaurant will include a new indoor-outdoor bar for casual drinks by the pool or cocktails before dinner.

Enhancing views of the natural beauty of the property’s 10,000 square feet of beachfront from the resort’s common areas is another of the project’s features. For example, a new entryway, lobby, concierge, bell desk and reception area, highlighted by a floor-to-ceiling picture window with the Gulf beyond, will greet guests when work is complete.

The work will also include:

A new event lawn on the south side of the resort’s grounds, with an unobstructed view of the Gulf of Mexico, ideal for weddings and receptions

The addition of a children’s water feature to the main pool area, along with a hot tub and new lounge seating on the upper deck

There will also be 12,000 square feet of upgraded and remodeled meeting space, including new rooms for smaller functions and upgraded adjacent patios to accommodate indoor-outdoor activities. The meeting space will include high-speed internet service designed for large numbers of simultaneous users, digital signage and service by the resort’s expanded and remodeled, restaurant and catering kitchen.

“We’re excited about it,” Parker said of the project. “We’re happy for Mac and the staff to be able to introduce this new product. This will be a real refreshing change for the Hilton and its customers so we’re glad to see it and we’re happy for them.”

Olshan Properties, which developed the Hilton in 1985, last updated the resort in 2012, when $9 million was expended to renovate and redecorate guest rooms.

The welfare of the resort’s employees hasn’t been lost in the mix of the summer-long closure. Olshan has taken steps to soften the blow by increasing and expanding its paid time-off benefits and also invited the workers to apply for several renovation-related employment opportunities. The company has also contacted neighboring hotels to try and place staff in temporary positions.

“We anticipate being fully staffed prior to our mid-October opening to re-train our team for the new and improved guest experience we will be offering and to ensure a seamless transition for our guests,” said Andrea Olshan.