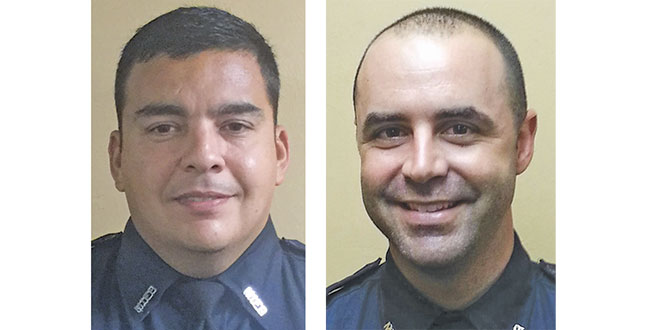 Marco Island Fire and Rescue Department’s Sergio Deleon and Munier Gattas are being recognized for their off-duty actions, which saved the life of Munier’s 55-year-old neighbor, Ron Krawczyk. Ron suffered from sudden cardiac death in his home on July 30, 2015.

The events that led to the award took place under circumstances that may have ended much differently.

That day, Munier was enjoying a well-needed day off. He had just purchased a home in Naples. Although Munier and his family did not live there yet, he had planned on completing a few projects there that morning. On the way, he and his wife Margaret stopped by a local store, where they ran into fellow firefighter paramedic Sergio Deleon and his wife Christy, a registered nurse. They invited Sergio and his wife to come over later and see the house. Munier and Margaret went to their new house and began work.

That same morning Munier’s neighbor Ron had returned home early from a business trip. He told his wife Chris he was not feeling well and said he was going to lay down. She wanted to take him to urgent care, but he said, “No, I’m fine. I just need to rest.” Five minutes later Ron was gasping for air, eyes open but not focused. Chris called 911 while running over to get Munier for help.

At precisely that moment, Sergio and Christy, who Munier had invited over that day after a chance encounter, were pulling up to Munier’s house. They saw Chris come running over, shouting “Get Muny! My husband is having a heart attack!” Sergio told Chris that he too was a firefighter, and he ran back to her house, with her, to help Ron. Sergio’s wife Christy, a registered nurse, sought Munier.

Seconds later, Munier came outside and saw Christy coming quickly towards him. She told him that Sergio was helping a neighbor with a medical emergency and that Munier needed to come and assist. Munier said “I thought it was a joke at first, because Sergio likes playing pranks. But I saw Christy’s face.” Immediately, he dropped his tools and ran to his neighbor’s house.

Sergio arrived first on the scene to find Ron laying face down on his bed. Sergio turned Ron over and checked for a pulse. When Muny arrived moments later, he saw that Ron’s face had turned blue. The men pulled Ron onto the floor to begin CPR. At the time, Ron had no pulse.

Sergio and Munier tirelessly performed CPR compressions while waiting for the North Collier Fire Rescue and Collier County EMS to arrive. The men did not have a defibrillator and Ron had no pulse. But they knew that the compressions were critical to keep oxygen flowing to Ron’s brain, so they kept at it. In fact, they continued the compressions on Ron even after EMS arrived. Munier says, “Nobody said stop!” Once help arrived, Ron was shocked with the defibrillator twice. Ron was taken to the hospital where he received three stents and spent a week recovering. He wore a Zoll external defibrillator for 90 days, and Chris tells us that he is now “doing well.”

Chris explains that Ron “doesn’t remember” the events of that miraculous day. Later, she was told by Ron’s physicians that there is only a 3% survival rate of sudden cardiac death outside of a hospital. Ron was brought back from death, twice.

Chris tells us that, “if they hadn’t been there, Ron would have been dead.” Chris felt it was nothing short of a miracle Ron survived, in light of the many coincidences that day:

When Chris thinks about that day she feels blessed that Ron survived, and awed by the work of the first responders and healthcare professionals who reacted so swiftly to provide the care he so desperately needed. She is grateful to Sergio, Munier and the fire rescue personnel and EMS, who helped to save Ron, her husband of 34 years. “Everyone who touched him that day did an amazing job,” she says.

Munier and Sergio will receive the Greater Naples Chamber of Commerce Distinguished Public Service Award on November 11, during a ceremony at the Naples Hilton. The annual award, established in 2003, recognizes exceptionally outstanding contributions by an individual to their public service profession, and to the wellbeing of the Collier County community. Munier and Sergio plan on attending the event with family.

When asked about the award, Munier says modestly that he feels “honored and blessed that Ron is ok, and that we were both there and able to help him out in his time of need.”

Chris has a message for everyone who helped save Ron’s life: “Thank you Muny, Sergio and Christy for saving my husband’s life. And thanks to each and every professional who came to his aid that day and the week that followed. You all have our deepest appreciation. God bless you and keep you safe. And thank you to your families who support what you do.”

In our everyday lives we rarely stop and thank the men and women who have dedicated themselves to help us during what is often the worst moments of our lives; Times when we cannot help ourselves; Times when we are scared, hurt or even dying.

Thank you to Sergio Deleon and Munier Gattas for your exemplary service on July 30, 2015, and on every day that you put on your uniform, go to work and serve the community.

The Marco Island Fire Rescue Department will offer CPR training to the public on Saturday, November 14 and Saturday, December 12 from 9 AM- 12 PM. Class size is limited and pre-registration is required. To reserve a spot, call Mary Husted at 239-389-5040.