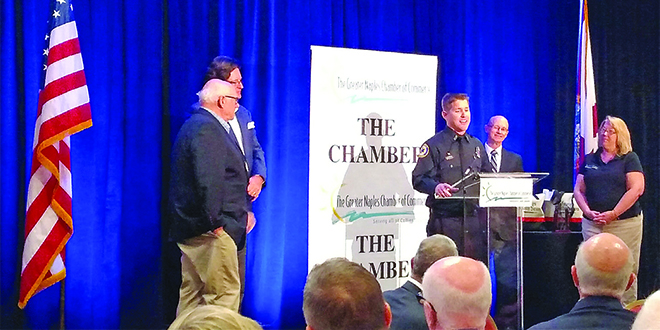 Photos by Steve Stefanides: Chris Bowden addresses the crowd after receiving the award.

Pride was on display on November 9, as one of Marco’s firefighter/paramedics was awarded the Greater Naples Chamber of Commerce 2016 Distinguished Public Service Award.

Firefighter/Paramedic Christopher Bowden was presented the award for his response to a call for a man down at the Greater Marco YMCA Tennis Courts on April 19th of this year. Bowden took command of the scene upon arrival, which found civilians administering CPR. Firefighter/Paramedic Hafid Oliver would take over that role as Bowden readied a LifePak 15 defibrillator for an analysis of the cardiac rhythm, which required him to shock the victim twice to regain a normal sinus rhythm to his heart.

The victim would survive the incident due to Bowden’s application of knowledge he obtained during training and his professionalism. Within two weeks the victim visited with Bowden at the station to thank him for saving his life. He also presented Bowden with a check for $5,000 as a gift to the department to utilize as they see fit.

Those monies were donated to the Fire/Rescue Foundation, and Bowden applied those funds to public education purposes, something he enjoys as he attempts to educate the general public regarding fire safety 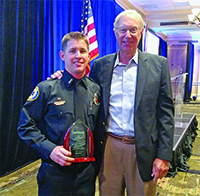 Firefighter/Paramedic Chris Bowden (left) with Mike Hannafan, who survived a heart attackthanks to the quick action of Bowden and others.

Bowden has shown his dedication to those goals by coordinating the training of over 200 Marco Island Charter Middle School students on CPR and the use of AEDs (Automatic External Defibrillator).

In addition to the CPR/AED training, he coordinates career days in the schools, the local Water Wise Program at the YMCA for third graders, helps to coordinate the Fire/Police Youth Academy, and coordinates Fire Prevention Week activities for the local elementary school and child care centers, which awards a Junior Firefighter of the Year Accolade.

He has also helped to complete a series of nine educational videos for local elementary students that is televised in the local elementary school. That program involves a “fire puppet” to help facilitate the training.

In addition to those activities he is involved with local scout troops on fire education and merit badge requirements for young scouts.

A native of Marco Island and a product of the Collier County School System, Bowden is a great role model for those adolescents who may aspire to follow a career path in the emergency services field. “Marco is proud to have Chris as one of our own,” said Marco Island Fire Rescue Chief Mike Murphy at the awards ceremony.