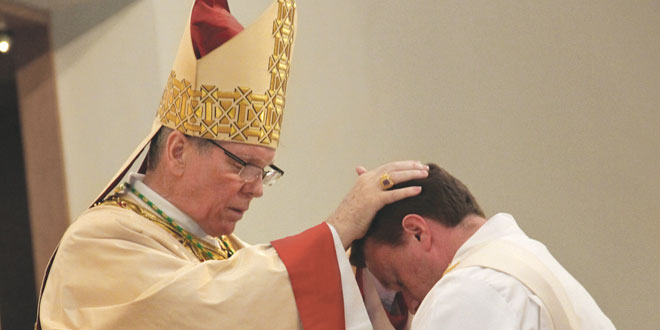 Fr. Joseph R. Gates, son of Kimberly Gates, of San Marco Catholic Church, was ordained to the priesthood on Saturday, June 29, 2013 by Bishop Frank Dewane at the Diocese of Venice Cathedral in Venice, FL.

Fr. Gates received a Masters of Divinity from St. Vincent de Paul Seminary in Boynton Beach, FL. The program included one year year of pastoral experience which he spent at Epiphany Cathedral. During the summers, Joseph interned and spent time in the Dominican Republic in an intensive Spanish program. A chaplain in an ecumenical setting in a hospital environment in Washington, D.C., Fr. Gates served in Campus Ministry at Florida International University, pastorally at St. Andrews in Cape Coral and as Deacon locally on weekends at the parishes.

His mother, Kim, and his seven younger siblings were among the first residents of Ave Maria and relocated to Marco Island 3 years ago. The siblings include Peter-Gabriel, 4, John-Dominic, 9, James, 12, Mary Katherine, 15, Rosalie, 17, William, 20 and Krystalyn, 28.

In addition to his mother and siblings, his grandmother Betty Weeks and his Aunt Allison and Uncle Trent Hall were present. Allison is Kim’s sister, and she and her husband have provided the majority of the vestments and liturgical items for Fr. Joseph. Fr. William Sozzi from Uganda, working in Marquette, MI and Msgr. John Mary traveled from Uganda to be at the ceremony. The Gates’ family helped build their church in Hoima, Bujuni, Uganda.

Fr. Joseph will be beginning his ministry working at the Cathedral. A mass of Thanksgiving will be celebrated at San Marco Parish during season.