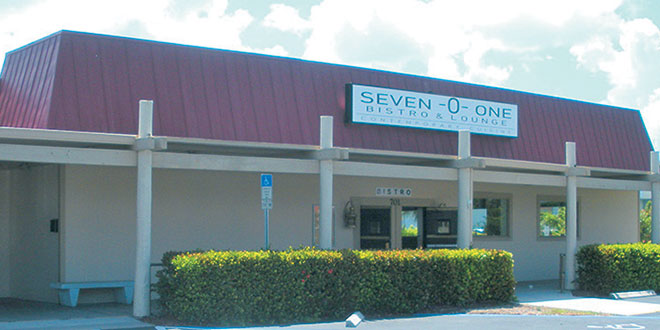 The sign may say Seven–0–One Bistro, but it will soon be replaced by one advertising the new occupant, Joey D’s Italian Restaurant, which will open later this year.

A pair of popular, multi-location restaurants are coming to Marco Island.

Joey D’s Italian Restaurant and Pinchers Crab Shack both plan to open their eateries during the latter part of 2016, in spaces that formerly housed two recently closed restaurants.

Pinchers will be located off S. Collier Boulevard in the Marco Walk Plaza, where it will occupy a building that was home to O’Donoghue’s Bar and Grill. Joey D’s will be located off Bald Eagle Drive in the former home of the 701 Bistro, which replaced longtime occupant Porky’s Last Stand.

This will be the 12th location for Bonita Springs-based Pinchers, a family owned and operated business with seven locations in Collier and Lee Counties, two in the Tampa area and one each in Key West and Lakewood Ranch.

“We don’t think of ourselves as a chain,” said Grant Phelan, who co-owns Pinchers, along with his father, Tony, and his mother, Kathleen. “We’re just a family owned business that happens to have multiple locations.”

The Phelans searched for 12 years before finding a suitable location on the island for their 19-year-old business, which features fresh, locally caught seafood and a casual dining atmosphere.

“When I was a freshman in college, one of my internships involved working as a server at the Marco Marriott,” said Phelan. “Living in the area, I’d always heard Marco was beautiful. But getting that internship and getting to spend some time down there, I realized what a beautiful place it is.”

Being situated near the

Photos by Don ManleyA worker from Pezzano Contracting of Naples helps to demolish the interior of what will be the new Marco Island location of Joey D’s Italian Restaurant.

Demolition is underway on the building’s interior, which is being completely gutted. The exterior will receive a new coat of paint and the landscaping will be redone. Windows and garage doors will be installed “so we can make it a completely open air restaurant when the weather is nice,” said Phelan.

The Phelans hope to be open by Nov. 1.

Diners will enjoy the same fresh seafood found at other Pinchers locations, due to the company’s partnership with Island Crab Company on Pine Island. “We have our blue crab boats and our own stone crab boats and grouper boats too,” said Phelan. “We have our picking house out there, as well.”

Pinchers’ Marco Island location will also feature specials found at the other locations, such as free meals for children up to 12 years old, two-for-one wine, “well drinks” and drafts, and for the daily 3 p.m.-to-6 p.m. happy hour, 75-cent oysters, shrimp and wings.

“We’re just very, very excited to come to Marco Island, and humbled and excited to be part of such a great community,” Phelan added.

Demolition work is also underway for the new Joey D’s, which should be open in November or December, said Marty Kenney, who co-owns the business with “Joey D”

“It’s going to be a brand new restaurant, all the way from the outside, in,” Kenney added. “The whole front and side of the building will be hurricane glass and you’ll be able to open it during season. It will be more inviting.”

Joey D’s also has locations at Immokalee and Airport roads, Greentree Plaza, in the Publix plaza at State Route 951 and Pine Ridge Road, and a stand-alone restaurant at the intersection of Davis and Airport roads.

“Everything we do is made from scratch,” said Kenney. “You get a chicken marsala, it’s made for you, not mass produced. It’s the highest-quality products. Nothing comes in a bag. Even though we’re high volume, we don’t compromise on quality. That’s why we’ve been around for 20 years, the quality and the consistency.”

Kenney and DiPascale have strong ties to Marco.

They both spent part of their youths on Marco, when their families moved to the island from Michigan and New Jersey, respectively, and first met here. Their mothers still reside on Marco.

In fact, the very first Joey D’s was located off N. Collier Boulevard, in a space now occupied by the Fin Bistro seafood restaurant.

Now is a good time to return to this market, said Kenney.

“With the growth, and the Marriott and Hilton doing huge renovations, you can see the transition of Marco becoming more of a destination and more year round,” he said.