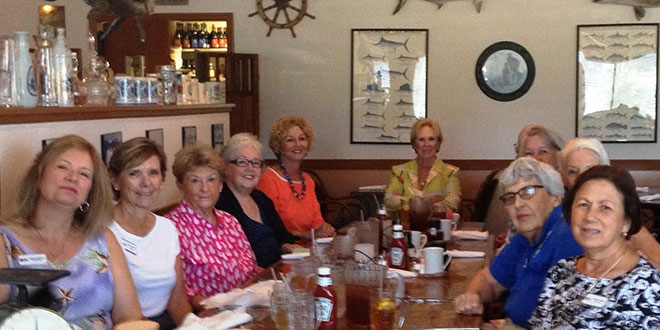 It was more than just a pre-Season get together October 16th.  It was a mini-reunion of local DAR members and an opportunity to observe the organization’s Founders’ Day.  The luncheon at Kretch’s marked the 124th anniversary of the founding of the National Society of the Daughters of the American Revolution. It also was the 38th anniversary of the Marco Island Chapter.

The DAR was founded in 1890 with the simple mission of promoting historic preservation, education and patriotism. This nonprofit, nonpolitical volunteer women’s service organization is dedicated to promoting patriotism, preserving American history and securing America’s future through better education.  It has nearly 177,000 members in 3,000 chapters around the world. These timeless, uniquely American principles keep the DAR strong and vitally relevant in this ever-changing world.  Regent Karen Lombardi welcomed returning snowbirds as well as full-time residents. Special guest, Ammo, a service dog for veterans being trained by member Debra Haeussler, deservedly was the center of attention.

The Marco Island DAR meets the third Thursday of November, January, February, March and April, with a luncheon and an always interesting program, outing or speaker. The group welcomes members from other chapters who are living in or visiting the area and it welcomes potential new members. So, if you have a Patriot in your lineage who served in The American Revolution, please contact Karen Lombardi at (239) 394-0028.