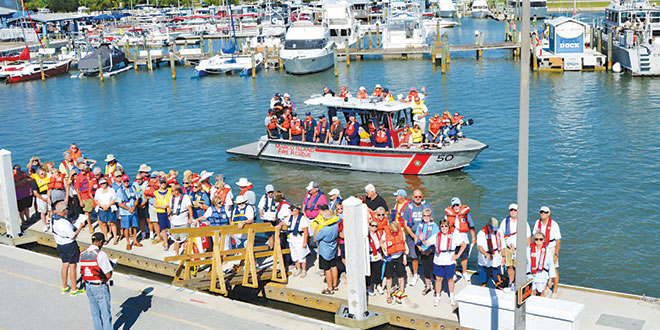 A panoramic perspective of the “Wear It!” effort, held at Rose Marina. PHOTOS BY DON MANLEY

Please forgive members of Marco’s boating-oriented organizations if you should occasionally hear them shouting “We’re No. 1” should you encounter them on the island.

They’re merely elated over the fact that Marco outdid six other sites around Florida with the number of participants in the National Safe Boating Council’s “Ready, Set, Wear It!” event.

Held May 16 by the National Safe Boating Council, “Ready, Set, Wear It!” promotes safe and responsible boating by having participants gather at designated locations wearing life jackets, in hopes of setting a world record for the most people wearing the flotation devices in one day.

Started in 2010, the National Safe Boating Week event did in fact establish a new record with a total of 10,917 people taking part, worldwide. The previous record of 6,973 was set last year.

“We just joined together to help set a world record and build awareness about wearing a life jacket when you’re out on the water,” said Gene Burson at the event. He is the public information officer for Marco Island Sail and Power Squadron, which organized the Marco effort. “It’s just a great way to build awareness and you need someone to take the initiative, and we do that through our training courses. We try to teach people how to be safe boaters.”

“Ready, Set, Wear It!” was observed at six locations around Florida, with the 95 participants who gathered at Rose Marina far outdistancing the second place total of 53 at the Fort Walton Yacht Club.

The Marco event was organized by the Marco Island Sail and Power Squadron, which brought together a host of other organizations to support the effort.

Power Squadrons across the country took part in “Ready, Set, Wear It!” which had the goal of making people aware that

The view from high above, thanks to Marco Island’s Civil Air PatrolSquadron and photographer Bill Hughes. AERIAL PHOTO BY WILLIAM HUGHES PRODUCTIONS

Boats from Marco Island Fire and Rescue and the Collier County Sheriff rested just off shore for the event, along with one from the Florida Fish and Wildlife Commission.

Rose Marina hosted the event and had a 20 percent-off sale on life jackets that day, and along with Naples based Snikwah Company, donated a life jacket that was auctioned off during “Wear It!” along with two hooded, long sleeve, highly sun-blocking shirts.

Like most participants, Alan Epstein attended with life jacket in hand. “You only have one life and our waters are coastal, mostly, so you really do need to be prepared for rough weather or if you have a boating emergency and you’re not going to stay with your boat,” he said.

There were 132 events held in the U.S., and also around the globe, in such countries as Australia, Brazil, Canada, South Korea and Nigeria. The world record included 65 dogs, one of them a Marco Island pooch.

“We’re going to go out and look at every navigational aid to see if it’s where it’s belongs, if it’s the right one there and whether it’s properly displayed so that it can help people be safe on the waters,” said Burson.

“Ready, Set, Wear It!” will be held on May 21, next year. For more information about the event, visit readysetwearit.com.