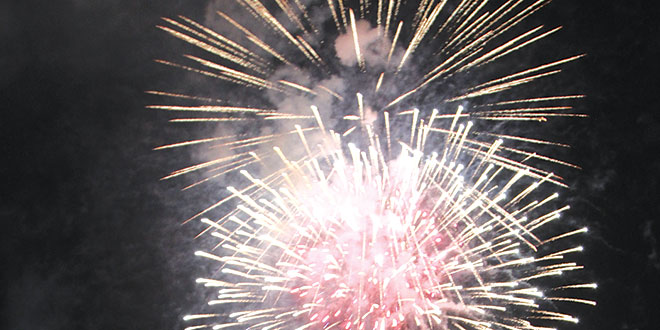 Marco Island did it again! The city government, community businesses, civic groups and residents came together to raise $44,000 for this year’s fireworks spectacular, and what an incredible show it was.

Each year, the city of Marco Island contributes half of the expense to

fund the fireworks. The Marco Island Area Chamber of Commerce’s Sandi Riedemann, along with Joey Oliveria of Joey’s Pizza and Pasta House, team up to raise the remaining half from local businesses and residents. 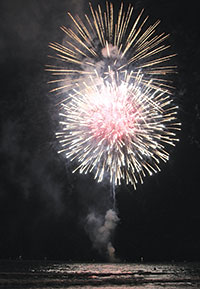 Uncle Sam’s Sand Jam — which begins at noon on July 4. The day includes food, music, games, arts, crafts and fun in the sun while celebrating our nation’s birthday. It culminates with a fireworks display on the Gulf of Mexico. Thousands attend the event every year.

More than 20 years ago, the Kiwanis Club of Marco Island began hosting the Fourth of July celebration at Residents’ Beach. These early events consisted of a community cook-out on the beach, complete with tents, grills, tables, chairs, live music and a fireworks display at dusk.

However, the popularity of the event — and its price tag — grew over time, and eventually, 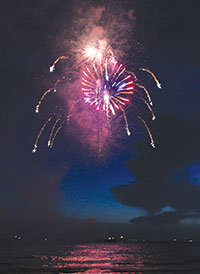 the Kiwanis Club could no longer fund it alone. Enter MICA, which picked up the event and its costs, incorporating a smaller, stadium version fireworks display. Later, the city stepped in to help pay for the fireworks, and combined effort was born.

The final days of fundraising brought in the title sponsor, the Marco Island Marriott Beach Resort and Spa. On Wednesday, June 25, Marriott General Manager Rick Medwedeff presented a check for $5,000 to City Council Chairman Kenneth Honecker. Then, on Monday, June 30, the final check for the fireworks in the amount of $11,000 was delivered to Honecker at City Hall by Riedemann and Santo Gentile, manager of Joey’s Pizza & Pasta House.