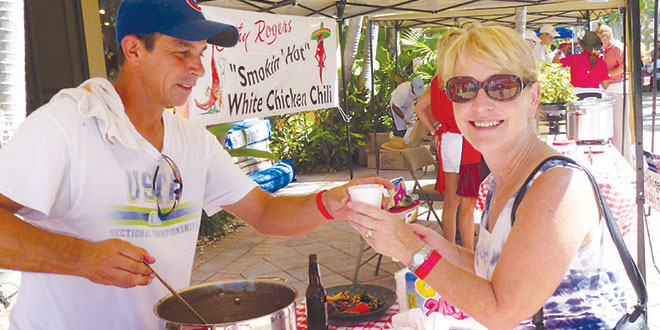 Tasters can expect secret ingredients and top-shelf chili as local cooks face off for the 4th Annual Jerry Adams Chili Cook Off. The event takes place at The Esplanade on Collier Boulevard, Marco Island, on Saturday, October 22 from 12-4 PM.

This year’s chef line-up is impressive. People’s choice will determine the winners from 17 entrants.

In the restaurant category, six chefs will master hot peppers and stockpots including Chef Bob Aylwin from Marco Island Yacht Club, Chef Annie Feinman from Mango’s Dockside Bistro, Chef Tim McCoy from the SpeakEasy, the team of Chefs Tim and Kim Burke from Stonewalls, and Chef Mike Duncan from Marker 8.5 in Goodland.

The Burkes of Stonewalls will be defending their 2015 top chef title.

Civic organizations plan to flex their culinary muscle, offering their ace cooks to compete. They include Natalia Armstrong from Marco Island Sunrise Rotary and Peggy Reis from the Marco Island Sail and Power Squadron. The teams of Bryan and Rhondi Hauser from the Kiwanis Club of Marco Island and Dan Moll and Joe Swaja from the San Marco Knights of Columbus Council #6344 also will compete.

In addition, individual entries will vie for the prize. Marketplace Home Mortgage will back Cheryl Stokes, Denny Verbance will be cooking for Home Watch Report, and Steve Schneider will represent Iberiabank’s team. Tina Nash will compete for Morgan Stanley to defend a 2015 win. Dr. Jerry Swiacki, candidate for Marco Island’s City Council, will round out the field.

“This is the tastiest competition on Marco Island,” said Dianna Dohm, president of the Marco Island Fire Rescue Foundation, sponsoring the event. “It’s also about the people who come out to support their favorite chefs. We love to see the rivalries, but more importantly, the camaraderie.”

Southwest Home Brew Club will offer beers for tasting and judging. Live music will be performed by the Ben Allen Band, including “Small Town Cowboy.” CJ’s on the Bay will provide a number of side dishes to complement chili entries, and happy hour priced drinks will be available throughout the competition.

Cost to participate as a taster and judge is $12 with children 10 and under free. The Marco Island Fire Rescue Foundation is a 501(c)(3) charity. For more information contact Barbara Murphy, 239-595-0488, or email bwmbase@gmail.com.