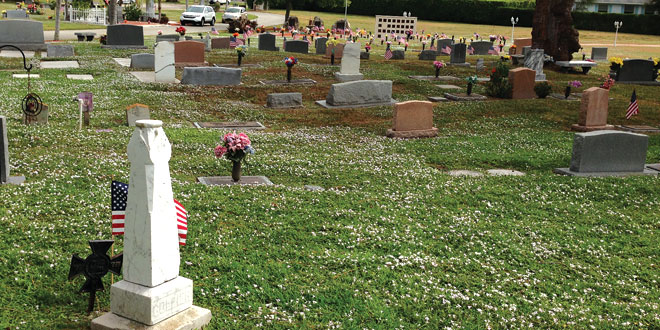 There is a hidden gem on Marco Island. It is passed by many daily, but is simply hidden in the fact that it is overlooked. It is the Marco Island Cemetery. For the past two months I have taken pictures of every grave at the cemetery for a special project and what an enlightening and touching experience it has been.

I imagine that you are much like me and walk through a cemetery only taking in what is obvious at first glance. Taking the pictures and indexing them forced me to stop and read what was on each gravestone. Some of the graves call out to you quickly when you see the balloons, the teddy bears, the angels and the touching mementoes of a child gone too soon. They speak of a family’s broken heart at the loss of their young child. But what of the gravestone that says, “He was my knight in shining armor?” Or the one that says, “Lovers Forever Dancing?” What a heart-breaking story there must be to tell of the one that says, “POW 1272 Days CPL US Army World War II.” How did that person exist in those circumstances and how did the family cope with not knowing what had happened to him? How proud must the family of the woman have been who will forever be known at her graveside as “A Woman Of Valor?” In addition, what more could a man ask than to be remembered as “Deeply Loved Husband, Father, Brother And Son. A Man Of Courage, Dedication And Integrity.” What a sad, sad time it must have been when three of the sons of W.D. (Capt.) and M.E. Collier were drowned in a sinking sailboat in 1898 at the ages of four, six, and eight.

Not all in the cemetery is sad, though. There is humor to be

found if you look closely. Jack Hare’s gravestone reads, “Hic Iacet Lepus.” That fascinated me so much that I looked on the Internet to see what it meant. Translated, it means “Here lies the hare.” And Lorreta Jean Skibbe’s grave says, “Poet Laureate” with her date of birth as 1927 and her date of death as “Immortal.” I certainly could not leave that one alone. Further on she has written her own epitaph- a poem, of course. It reads, “I fear my epitaph will read/ Neat and clean was her finest deed/Or another that would tell/ Here she lies/She dusted well.”

Some of the graves have been marked with glorious marble headstones. And some are merely the remnants of something obviously homemade by a loving family. The fancy ones have their message written by someone who is a master with a chisel and a slab of stone. Others, one can imagine, have had their equally important message written with a stick before the hand poured cement had a chance to dry.

William H. Cook Jr.’s grave is a fairly elaborate one and anyone viewing it might assume he came from a wealthy family. Not so. His father was a ship’s carpenter who lovingly framed out a form and poured the cement to make this tribute to his son who had been in the Signal Corps in World War II. My photo shows that it had grown rather tattered and covered with moss. Eric Hall, the caretaker of the grounds of the Marco Island Cemetery recently made it look brand new with a coat of paint. (If you happen to find Eric at work one day see if you can interrupt him for a few minutes as he is an interesting young man to talk to. He gives our loved ones as much tender care as he did for others buried in larger cemeteries containing thousands of burials where he previously worked.) 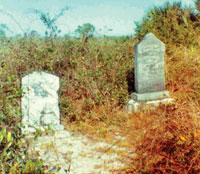 On the left is buried Margaret E. Collier (wife of William D. Collier) and on the right lies their three sons who drowned.

cemetery’s upkeep is the responsibility of the neighboring church. When Marco Island was being developed by Mackle Brothers, land was set aside for all the churches to come to the island. The church agreeing to take over the care of the then somewhat forgotten and bedraggled cemetery was given a larger piece of property in exchange for taking on this responsibility. In the past, that was the Church of God, but now it is overseen by the New Life Community Church. What was once a tiny pioneer graveyard has now become a cemetery with many graves and room has been set-aside for many more in the future as the island continues to grow.

There are several areas that are highlights of the grounds. The Christmas Box Angel was added in the late 1990’s as a tribute to the young children buried here. Each year, in early December, a special ceremony is held and white flowers are placed at the Angel’s feet and in her arms to commemorate the purity of these lost children. Under the Angel the ground is covered with bricks bearing messages telling of the families and friends who still mourn.

Next to the Angel stands a beautiful memorial statue to our veterans who fought and died for their country. Tucked back in the corner is a very old, tiny church, which has been renovated to its original condition after many, many years of use before it was moved from its previous location next door to where Marek’s Restaurant now stands. My husband remembers sitting next to his grandmother swinging his bare feet while listening to the Sunday sermon. It is still used now and then for special occasions such as small weddings.

If you go to the cemetery and pay attention you will find many other things to look at, read and be touched by. I did not even begin to bring together all the historical family ties that 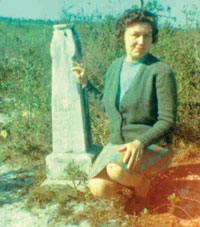 Headstone for William T. and Elizabeth H. Collier (past and present). PAST PHOTOS BY GLENN DUGGER

exist there. While doing this project, my husband, who spent his youth on Marco and has many of his own family members still here, often explained one family’s connection to another family buried in another part of the cemetery. Marco Island as it is today may be fairly new, but its cemetery is steeped in over 130 years of fascinating history.

So what got me involved in this enormous photographic project? When my son died in 1989 I discovered a website on the internet called “Findagrave.com” that allowed anyone wanting to do so to upload a picture of a grave site along with information about the person buried there. Its purpose was to make it possible for those who could not come see the grave in person to be able to view it there. This site has over 107 million memorials on it from cemeteries all over the world with pictures included in most of them.

Volunteers have taken photos for this website just because they wanted to. Nobody is paid to do so. If you have a relative, friend or acquaintance that would like to see what someone’s gravesite looks like they have only to go online to find it. If it is not already there they can make a request that one of the volunteers take a picture of it for them. When my son died I added a photo of his marker to this site and have since taken pictures for others who have requested it. From that first photo it bloomed to my current list of over 1,500 pictures taken and put on this site. I have made copies of all of these pictures and created an index to give to various groups such as the Church that oversees the care of the cemetery, the Marco Island Historical Society, the Florida Cemeteries Project, and a few local people such as Craig Woodward who have shown an interest in the history of the area.

One response to “Marco Cemetery Gems”