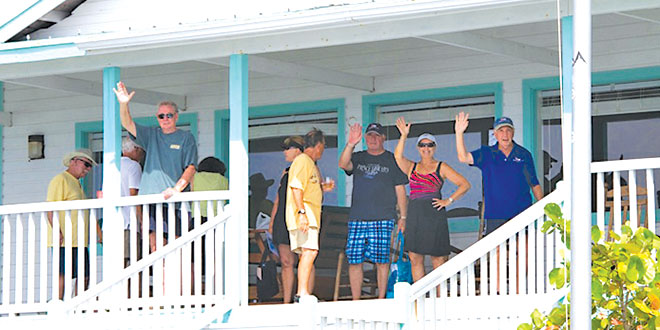 The Abaco Islands lie in the Northern Bahamas – 180 miles east of South Florida. They comprise the main islands of Great Abaco and Little Abaco, along with smaller barrier cays (pronounced keys).

On April 16th, all seven boats met up, spending the first night at the Old Bahama Bay Marina located in West End, Grand Bahama Island, only 80 miles from Ft. Lauderdale.

West End, also referred to as Settlement Point, is the 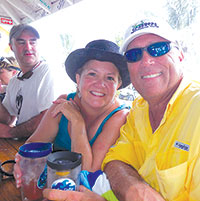 On April 17th, it was off to Spanish Cay to spend the day and night in its beautiful three mile long paradise of tropical beaches and palm groves, surrounded by boundless horizons of aquamarine waters and pristine coral reefs. Here members of the yacht club sign a tee-shirt and leave it as a souvenir, proudly hung on the ceiling at the marina’s bar and grill.

On the third day they

settled in at Marsh Harbor’s Boat Harbor Marina for five nights. From there, many ferries were available to take them to places like the famous Nippers on Great Guana Cay, where fun was had by all.

Afterwards, they were off to Man-O-War Cay to visit the boat museum, where early Loyalist settlers started the tradition of handcrafting boats more than two centuries ago. Only about 300 people live on the skinny, two and a half mile long Man-O-War Cay, many of them descendants of the first settlers.

On the 23rd, ten more members flew in and met in Treasure Cay. More pictures to follow!