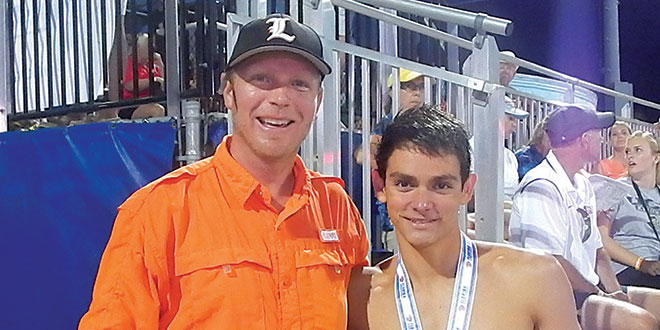 Marco Island area student-athletes shined in many fall sports, resulting in many being chosen to All-Area teams.

Top dog was Lucca Delcompare of Isles of Capri, chosen as the Boys Swimmer of the Year. In his final season at Lely, Delcompare finished in the top four in his two specialties, 100 yard butterfly and 200 freestyle at the state championships for Class 2A.

“Lucca steadily improved every year,” coach Adam Peterson said. “His sisters will be very good next year. I think Lucca was happy about his year and I am happy with the boys season as they collectively broke many school records.”

Delcompare approached the season with getting better at each meet.

“I set goals as to times in events, but mostly tried to relax and race,” he said. “Each meet was a stepping stone.” 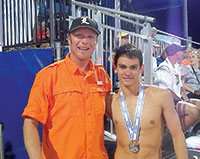 Lely’s Lucca Delcompare wears his silver medal after finishing second in the 100 butterfly at the state swimming championships. With him is his coach Adam Peterson. PHOTO BY ROGER LALONDE

first year she took the Ray Trojans to the Elite Eight before losing to Robinson in the 5A state volleyball championships. Her 27-6 team finished the season ranked 16th in the state.

Freshman volleyball coach a year ago, and having some of the team during her three years of club coaching, Haire said, “It was not a surprise these girls were knowledgeable when it came to volleyball. I also had a great group of people to lean on for advice.”

“It is always rougher at the beginning. Everyone goes through hiccups.”

Team members Kaitlyn Ziegelmaier and Jessica Ricciardelli were named to the All-Area squad, while Lely’s Katie Moss of Marco was an honorable mention.

The team loses five seniors, but has a strong junior class and underclassmen that Haire feels will be very competitive.

“We look forward to challenging for our sixth straight district championship,” she said.