Many hands fill Meals of Hope 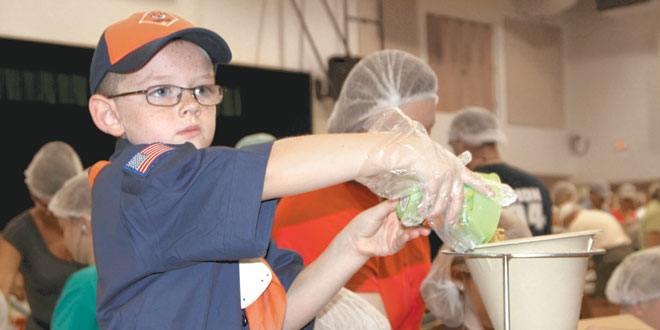 The Meals of Hope exceeded each goal set by event chairman, local attorney Neil Snyder; better known to his committee members as “Captain Hope.” The Captain and his “Hope Warriors” challenged the Sunrise Rotary Club, Noontime Rotary Club and Kiwanis Club, as well as schools, churches and organizations on the island. Then, they watched magic happen!

The Meals of Hope takes dry ingredients, along with a mixture of protein and vitamins and packages them together. “There are rice meals and a macaroni and cheese meal. Each meal will feed six people.” According to Steve Popper, the Rotarian who brought Meals of Hope to Southwest Florida several years ago, “there are over 900 homeless children in Collier County. These meals will be distributed through local organizations, Harry Chapin Food Bank being the primary distributor.” The Meals of Hope packaging event held at the Marco Island Charter Middle School gym on November 17 far exceeded its goals…here is a breakdown of the results:

3. Just under 600 volunteers hit the gym ready to assist, surpassing the goal of 500 people.

This year a 50/50 raffle was added to the mix which raised an additional $3,450. The raffle was won by Craig Woodward. A few “Warrior Celebrations of Hope” held at venues CJ’s on the Bay, Bistro Soleil and the Marco Island Princess led up to the big day, keeping motivation up and allowing everyone a chance to participate.

Captain Hope sent out a message following the event. “Far too many Warriors worked together to make the 2012 event the overwhelming success it was, to thank folks individually. However, I do want to thank my co-chair persons, my logistics committee and each and every member of the Marco Island Sunrise and Noontime Rotary Clubs as well as the Kiwanis Club of Marco Island. Also, thank you to all of our business and community partners who gave so much of yourselves. You are all amazing! It is my sincere hope that the three clubs as well as our business and community partners will join together again in 2013, and on Saturday November 16, 2013, work to ensure that no child in Collier misses even a single meal.”