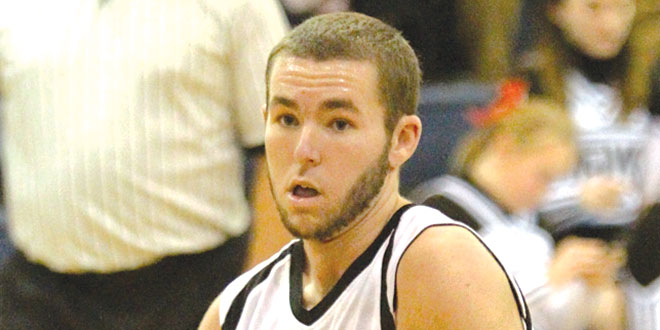 No problem for the 7-3 Manta Rays, as they ran away with the contest in the last three quarters, resulting in a 78-61 win. It was their third straight Class 2A-District 12 victory.

Peter Servente came off the bench and singed the nets for a career high 32 points, with seven three-pointers. Quietly, team leader Cole Stretton added 20 points, including three three-pointers, and Brandon Estremera made four three-pointers for 12 points.

During the game, the Rays ran hot and cold, but when Seacrest challenged, MIA responded with double-digit leads as high as 17 points. 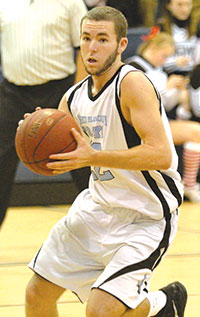 Peter Servente drives to the basket in Marco Island Academy’s 78-61 win overSeacrest Country Day. Servente drove to the basket and sat outside, making seven three-point shots in a 32-point scoringgame for the senior.

With nearly half the season gone, Stretton continues to be the man. The junior has surpassed 1,000 points in his career and is averaging 20 points a game. He made the “Naples Daily News” All-Area First Team a year ago and is not showing signs of slowing down.

Stretton is quick to credit the team for his offense. “When we play good defense, it helps create the offense easier,” he said. The defense is averaging 10 steals a game.

“The team’s chemistry is better with the addition of (Tyler) Gresham,” Stretton said. “We have a lot of ways to put the ball in the basket.”

Coach Roger Raymond agrees. “We live by the three-point shot, but what makes it go is the defense,” he said. “Peter 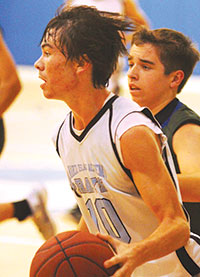 Cole Stretton looks down court for a teammate. Stretton set up his teammates while scoring 20 points himself. Stretton is the first Manta Rays basketball player to surpass the 1,000-pointscoring mark and is just half way through his junior season. SUBMITTED PHOTOS

Servente lit it up tonight, and Cole had another solid game. We have Brandon (Estremara) and Brian Flynn who can also hit the three’s which makes it a bit better for our inside men who usually are outsized up front.”

Preston Reese, Patrick Michel and Gresham handle the boards. Reese and Michel have been he-men against taller players. Reese again leads the area in rebounding at 10 per game. Gresham, a sophomore, is getting better as he learns how to use his size and athleticism.

The Rays surpass the national average in every statistic:

The Rays are off for the holidays, resuming play in hosting Fort Myers-Canterbury at 7 PM on Jan 6.