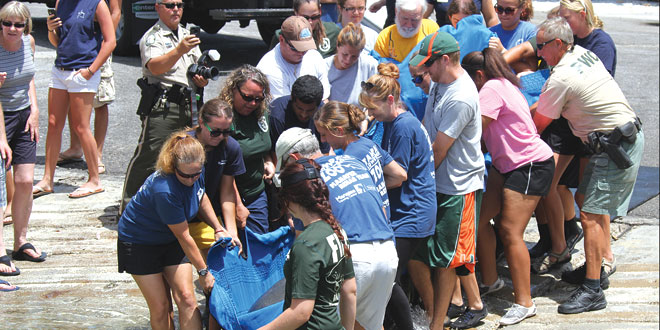 Two Southwest Florida manatees are breathing easy thanks to a large team that recently recovered, revived and rehabilitated the sea cows during the recent red tide algae bloom that occurred between September 2012 and April 2013.

On June 13, the two manatees – one male and one female – were released back into the wild around the Gasparilla Island/Boca Grande area in Lee County. A total of 16 manatees were actually rescued in Southwest Florida during the unusually large and long red tide event. Of that 16, 15 lived and are expected to make a full recovery. The rest will also be released in Lee County.

According to the FWC’s press release, a large concern is returning the marine mammals back to a location close to where they were found, “due to the manatees’ familiarity with the area.”

While Marco Island felt the effects of red tide and even saw the effects on its beaches, the bloom did linger a bit north, giving cause to the 16 rescues located in Lee. As Florida Fish and Wildlife Conservation Commission (FWC), Kevin Baxter, explains, “Red tide actually releases toxins that sink down and build in sea grasses, causing the manatees to become sick.”

With a diet made up 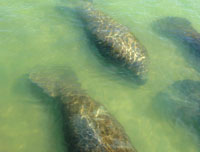 primarily of sea grass, the herbivore can – and did – mean disaster for the species. This recent red tide bloom claimed up to 270 manatee lives – a number much larger than the average.

According to Baxter, the 15 that were saved were identified by beach goers or locals in the know. During the bloom, extra efforts in the area were made to educate the public and the recently released female is a prime example.

“Typically, when a manatee is effected by red tide, it has a hard time breathing and keeping its head above water,” explains Baxter. “A couple saw the female exhibiting this behavior and called the FWC hotline for injured marine mammals. They were told to help the manatee by keeping it’s head above water so it could breathe.”

This type of emergency is certainly the only time it would be acceptable to touch or “harass” a manatee, as they are protected under the Marine Mammal Act and the Endangered Species Act. Thankfully, the couple was successful and FWC was able to recover the sick manatee and send her to Lowry Park Zoo.

The male was initially sent there as well, but moved to Sea World Orlando earlier for care to ensure the zoo

A deceased manatee washed up on Marco’s beach during the red tide bloom. PHOTO BY KEVIN MCMANUS

had space for critical care cases. “We basically have three initial response places (to bring the manatees): Lowry Park Zoo in Tampa, which has a lot of manatee rehabilitation experience, Sea World and the Miami Seaquarium.” All 15 spent the majority of their time at Lowry Park Zoo.

The rehabilitation process, “depends on the animal,” adds Baxter. Some need medical intervention while others simply need to eat non-toxic sea grass and swim in safe waters until they have recovered.

The next manatee release date is set for some time in July, but before these sea cows will be sent back to their watery paradise, FWC will make sure it’s safe. Waters are consistently monitored as well as sea grasses for toxins, according to Baxter. Now that the coast is clear, so to speak, these manatees are finally being freed and feeling great.

due to the manatees’ familiarity with the area.

The public is asked to report distressed or dead manatees by calling the FWC’s Wildlife Alert Hotline at 888-404-FWCC (3922), dialing #FWC or *FWC on a cell phone, or texting Tip@MyFWC.com.

Florida residents can support manatee research and conservation through the purchase of the Save the Manatee license plate. For more information, visit www.buyaplate.com. To learn more about manatee conservation, go to MyFWC.com/Manatee.