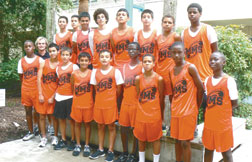 The Manatee Middle School sports program has been led this year by the undefeated boys’ cross country team. The team members demonstrated plenty of natural ability with a strong work ethic to go with it, and that spelled doom for all opposition that took to the starting line against the Hurricanes. The team was led by 8th grader Bobby Garcia, who placed first at every meet throughout the regular season. He finally met his match against an Immokalee runner in the championships, but the depth the Hurricanes displayed meant the team title belonged to Manatee.

The Hurricanes placed all five of their scoring runners in the top 10 overall. Bobby was helped in leading Manatee to the championship by Luis Rubio (4th place), Kevin Ulloa (5thplace), Javier Garcia (9th place), and Wadson Joseph (10th place). All of these runners earned a medal for their top 10 finish, and the team earned a trophy for their efforts as Collier County Athletic Conference Champions. Also joining the Hurricanes varsity team was Marcelino Arreguin with a 15th place finish and Sam Martinez who placed 21st.