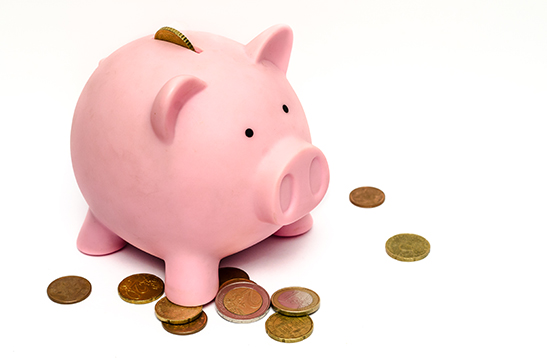 “Government’s first duty is to protect the people, not run their lives.”

Question: How much influence will either presidential candidate have on financial markets when one of them moves into the White House?

Answer: A study by American Funds® Capital Group reviewing U.S. presidential elections since 1934 shows that market returns over the long term, meaning ten years or more, rely more on the strength and resilience of the American economy than on which party occupies the White House. Whichever candidate wins, the economic implications of the U.S. presidential election tend to be overblown by politicians and the media. During political campaigns the country’s challenges are typically highlighted. This negative focus and differing opinions of which political party is best for the markets may discourage some individuals from investing.

Politicians talk a lot about their party’s economic platform and this discussion can increase market volatility. As long-term investors (rather than traders), we know that short-term noise and volatility come with the territory. History suggests that market performance is largely independent of which political party prevails on Election Day. The U.S. economy is more dependent on market fundamentals than on what happens in Washington, D.C.

The fundamentals of economic growth are revenues, earnings, and actual growth. Issues that influence these factors are labor markets, demographic trends, productivity gains, inflation, trade models and tax policies. Although the presidential candidates are indeed different during each election cycle, the factors that drive our economy and financial markets remain the same.

Gross Domestic Product (GDP) is a standard growth measure. GDP is the monetary value of all the finished goods and services produced within a country’s borders in a specific period of time. Nominal GDP (NGDP) is the sum of GDP and inflation. Both measures are closely related to corporate earnings, which ultimately drives stock prices. By including inflation in the calculation, NGDP serves as a meaningful economic measurement.

In generating its long-term forecast for NGDP, the Bureau of Labor Statistics (BLS) combines a forecast for labor market growth and productivity growth, neither of which can be governed by politicians. Labor market growth is based on demographic trends, which move slowly and are relatively easy to measure. Productivity growth is more difficult to forecast because it is largely based on new technologies and innovation. The internet, smart phones, digital photography, imaging, and robotics are innovative technologies that have greatly influenced productivity and labor markets.

The BLS forecasts annual growth of roughly 0.5% for the labor force, and approximately 1.8% for productivity growth, for a total 2.3% increase in the real GDP forecast. To create a forecast for NGDP, we include an inflation factor. Many economists think inflation will be roughly 1.5% per year over the next 10 years. Therefore, a number of 3.8% (2.3% + 1.5%) could be used as 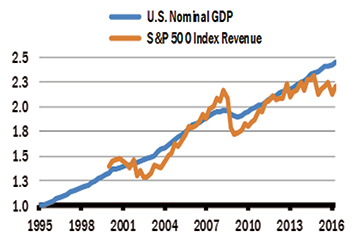 an estimate for NGDP on average over the next several years.

Based on these assumptions, it is possible to create expectations for U.S. economic activity, revenues, and earnings over the long-term. Obviously, changes in short-term events can derail the economy at any time causing acceleration or declines in the near-term potential of revenue and earnings growth.

Steady and slow economic growth is likely the path for the U.S. economy in the foreseeable future. This statement is based on reasonable input and analysis using data such as labor force and productivity growth rates, inflation, corporate revenues, and earnings, none of which that are directly or significantly impacted by a presidential administration.

Granted, an administration may influence specific industries through various policy measures (e.g. regulations or subsidies), but, in total, what drives the U.S. economy is the stable growth rate of our labor force and productivity of the private sector. It is these factors that should be the areas of focus for broad equity market investors. Unlike China, where there is a centrally planned economy, these components aren’t driven by the president of the United States.

Our founding fathers had the wisdom to leave us with a system of checks and balances to prevent any president from holding too much power. Capitalism and democracy provide an upward tilt for our economy and financial markets. This has held true despite many different administrations, both republican and democrat, with very different economic and political policies over the years.

Is it different this time? Yes, the candidates are different yet the primary factors driving our economy remain the same regardless of who is in office. Demographics, productivity, and inflationary trends are the basis for economic and financial activity. The current economic and political challenges may seem unprecedented, but a look back shows that controversy and uncertainty have surrounded every race. Stay focused and invest accordingly. Is it November 9th yet?

There is no assurance that any of the trends mentioned will continue in the future. Information received from outside sources is believed to be credible. The opinions expressed are those of the writer, but not necessarily those of Raymond James and Associates, and subject to change at any time. Material is provided for informational purposes only and does not constitute recommendations, investment advice or an indication of trading intent.