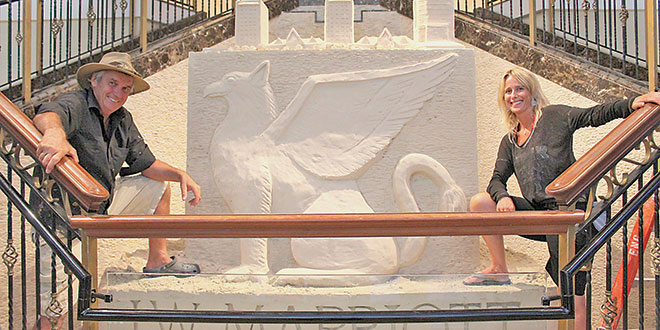 by Don ManleyJohn and Laura Cimador Gowdy and sand sculpture of a griffin they created recently at the Marco Island Marriott Resort Golf Club and Spa.

John Gowdy is used to eliciting oohs and ahhhs from observers of his handiwork.

It’s something that occurs with regularity at the Marco Island Marriott Resort Golf Club and Spa where he’s been crafting the eye-catching sand sculptures prominently displayed by the lobby stairs since 2005.

Known as the “Man of Sand,” Gowdy is a retired Atlantic City fireman who has travelled the world competing in sand sculpting contests, winning numerous championships over the last decade.

“I’d like to carve on the moon someday,” quipped the New Jersey-based Gowdy. “I hear they’ve got some good sand up there.”

sculptures that greet guests as they enter the lobby from the pool area.

“This is the best sandbox ever,” said Gowdy.

He and his co-artist wife, Laura Cimador-Gowdy, recently visited the Marriott to transform 7½ tons of sand into a four-foot-high and equally wide relief sculpture of a griffin, which replaced their previous creation, King Neptune guarding a treasure.

Relief is a technique in which sculpted elements are attached to a solid background of the same material, giving the impression the sculpture is extended outward from the background.

The griffin is part of the logo of the J.W. Marriott brand. The resort is in the midst of a $250 million expansion and

improvement project that will see it elevated, in January, from a Marriott to the more upscale J.W. Marriott brand.

The Gowdys spent five days carving the winged creature of Greek and Egyptian myths, placing it on the front and rear panels. “I had a problem with the beak and the wing and that’s the reason for doing it as a relief,” said John Gowdy.

Running along the sculpture’s top is a mock-up of the resort’s skyline, including, on the right, the 94-room, adults-only Lanai Tower now under construction that will feature a rooftop pool, a restaurant and a 12,000 square-foot, state-of-the-art, indoor entertainment center.

“We’ve always wanted to have the skyline 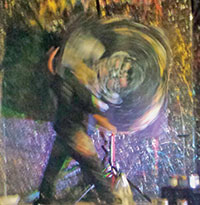 of our property,” said Bob Pfeffer, the Marco Marriott’s director of sales and marketing. “Because of the nature of the sand, we’re finally able to do that.”

Gracing the sculpture’s narrow sides is the date of the Marriott’s official step up in class – Jan. 1, 2017, which was carved by Laura Cimador-Gowdy. She is an oil painter whose interest in sand sculpting was sparked when she met her future husband 10 years ago while he was practicing the art on a beach in Italy, her home country.

“I thought of sand as something you walk on and then, all of a sudden I saw a masterpiece on the beach

and I couldn’t believe it was sand,” she said. “I was drawn like a magnet. I needed to know what was going on. Everything I’ve learned about sand sculpting, it’s because of him.”

Aside from Neptune, John Gowdy’s Marco Marriott sculptures, over the years, have depicted Margo the Mermaid (a statue of the famous comic book character sits near Quinn’s restaurant), the Atocha (a gold-laden, Spanish ship that sank in the 1620s in the Florida Keys), pirates, dolphins, children, wave runners and more.

“We usually try to keep it organic with local flowers, animals and sea life,” he said.

Pfeffer, who has known John Gowdy since they attended high school together 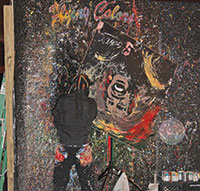 in Absecon, N.J., said the griffin is his favorite so far.

He said the sand sculptures are popular with guests.

“People request this,” said Pfeffer. “You’ll see people come here every year and take their family picture in front of the sculpture. They’ll look to see what’s changed and ask what the new one is going to look like. It’s become a signature piece of our lobby.”

On a Saturday at sundown, John Gowdy donned a second artistic hat and gave his skills as a showman full reign by treating people to his Flying Colors performance painting show.

Setting up shop with a dark-colored 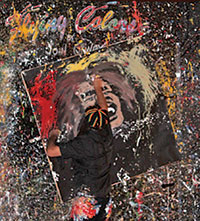 background he placed on the beach, the artist then affixed a canvas and opened his paints. After some bantering with the crowd, John Gowdy cued the music, a reggae tune, and the canvas began to spin. He then began applying paint with brushes, and fingers and hands, sometimes pushing it and other times throwing it in gobs.

When the canvas stopped spinning, about seven minutes later, the result was a portrait of reggae icon Bob Marley, which was one of three portraits of stars that he created that evening. The paintings were auctioned off with half of the proceeds going to the Marco Island office of the American Cancer Society.