Make Me: A Jack Reacher Novel 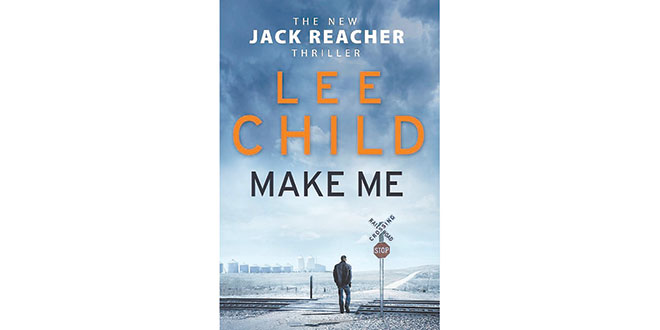 “Admit nothing, even on your death bed. You might suddenly get better.” ~ Jack Reacher

Jack is back in this 20th installment of this billion-dollar Lee Child enterprise. Be forewarned that Jack journeys to a very dark place in this adventure. If you are looking for chuckles or warm fuzzies, this is not the story for you.

If you have previously read a Reacher novel or two you know that Jack started out as a kind of modern-day Lone Ranger (minus Silver and Tonto). He is on his own, travels with the clothes on his back and a toothbrush in his pocket. When his clothes get dirty he throws them away and buys a new outfit. He stays at inexpensive motels and sometimes with friends or he makes do. He does not have a job, was discharged from the military after 13 years with the rank of major, and perhaps got a severance package. No pension because he did not serve long enough. Occasionally he will pick up money from grateful people he has helped, and has been known to help himself to the bad guys’ pocket change occasionally. He travels on public transportation, mostly busses and trains because he has no car and does not know how to drive. When you do the math, Jack’s lifestyle is very expensive, but of course we suspend disbelief when we open any novel. Besides, we want to believe that Jack is roving the countryside looking for downtrodden people who need his brains and brawn.

In “Make Me,” Reacher gets off the train at a place called Mother’s Rest, which is supposed to be in Oklahoma. He notices bright lights off in a distance, but he gets off because he is interested in knowing the origin of the town’s name. That is why we like Jack – he is bright, curious and a little poetic. It is midnight when he detrains and he runs into a woman dressed in black who was obviously looking for someone else. It is Michelle Chang, looking for her PI partner Keever. Mother’s Rest is so remote that there is no cell phone reception, so Michelle has been meeting the train ever since she has been in town, looking for Keever who had asked her to join him. The train stops at 7 AM and 7 PM, having been extremely late the night Reacher arrived. After getting a room from the one-eyed clerk (never given a name other than that), Reacher notices on his way to bed that the one-eyed clerk is sitting on a lawn chair, watching Reacher’s room. The next day when Jack walks the little burg looking for a wagon train trail or a museum to explain the history of the place and its name, he notices a 12-year-old boy trailing him, ducking out of sight when Reacher turns around. There are strange reactions from everyone he encounters on his walk.

At breakfast, Reacher again runs into Michelle Chang, former FBI agent. By this time, his curiosity about this place is piqued because of the odd evasive behavior of everyone he has encountered. Only the waitress has been “normal.” Of course Michelle and Reacher team up to find Keever. Now the action begins. Michelle has everything Reacher does not – smartphone, a rental car, a gold card, contacts at the FBI and other places, etc. They crisscross the country, going to LA, Chicago, Phoenix, before returning to Mother’s Rest. They meet and eventually team up with Ashley Westwood, science reporter for an LA newspaper. What they have learned about Keever has led them to some “off-the-wall” people who contact Westwood about various conspiracies and scientific anomalies. Via Westwood’s contacts, they are taken to the Deep Web, which apparently is a real thing. Most of us mortals are only familiar with the surface internet, which is where only 14% of web activity takes place. From there they put the pieces together and plan their return to Mother’s Rest.

The reader knows there has to be a surprise because there are too many chapters left for it to be over. It is a heck of a twist. Dark, grim, bleak, cataclysmic, dismal, evil.

Reacher novels are not literary works. They are for enjoyment and escapism. Child fits his writing style to this genre by making his sentences short, sometimes even choppy, with no long introspective narratives. The story is about action and so is the sentence structure. One of Child’s truly strong traits is his ability to write action scenes so well that the reader can picture it in his/her mind’s eye. (I saw Lucy Liu as Michelle and Robert Downey, Jr., as Ashley Westwood.)

In “Make Me,” he used a clever device to set a bleak undertone early in the story by not giving the Mother’s Rest inhabitants names. They are referred to as “One-eyed man, Cadillac driver, the man in the jeans and blow-dried hair, the hog farmer, the counterman,” etc. Other than a pair of brothers that Reacher has an early run-in with, we do not learn the names of these people.

There are significant hints in this book that the series may be ending. Reacher deals with a serious injury throughout the last half of the book and it is clear that he is not getting any younger. In this technologically advanced world, it is straining credulity to keep Reacher in the dark ages in that regard. Maybe #21 will be Reacher’s Retirement. Child could always go for some prequels (he has written two) and write another series about Reacher in the military police. Or create another stupendous character. Rating: 3.75/5.0.

October 16, 2015, is National Mammography Day as well as Boss’ Day! Remind your female friends and family members about a mammogram. Remember to thank your boss.