Major event just a year away! 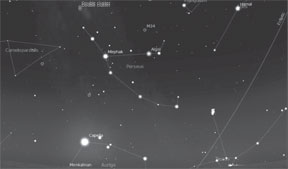 We looked at this region of the sky just two weeks ago; notice how the sky has rolled upwards since then? Perseus, which was just starting to rise last edition is now well clear of the horizon. Being in the Milky Way Perseus is full of interesting deep sky objects, but it is probably best to wait until the constellation is a bit higher to scan it with your binoculars.

Pay particular attention to Capella, which is just now rising. Observe how it sparkles, flashes on and off and changes colors constantly. This is really nothing more than extreme twinkling caused by atmospheric effects when looking through the thick air near the horizon. Some days it is more noticeable than others. Capella is now the perfect example of how an ordinary, everyday object can be mistaken for a UFO. Since the majority of people never really look at the sky, they are unable to identify the object as a star and many promptly leap to the UFO conclusion. As further evidence to support a faulty conclusion, after a few minutes they will usually point out it’s moving. (Being close to the horizon a star’s motion is more readily apparent.)

As the comet pulls away from the Sun it will rapidly dim and rise into the darkening northern sky where it should produce a magnificent tail as it passes Earth about 40 million miles away.

There are two possibilities that may prevent the comet from being as spectacular as predicted. One, this is a comet that is making its first pass around the Sun – such comets are notorious for fizzling out; and two, the comet has to swing very close to the Sun (less than a million miles) – it may not survive the trip.

Comet ISON is a different comet than the one mentioned a few months ago; that one is Comet PANSTARRS and is still on schedule to be a naked eye comet in March 2013.