Magistrate or No Magistrate? That is the Question 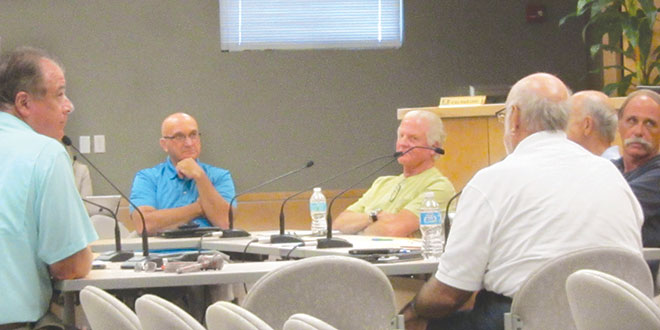 Members of City Council meet at a workshop with the Code Enforcement Board to discuss their possible replacement with a Magistrate. PHOTO BY CAROL GLASSMAN

Whether to replace the city’s Code Enforcement Board (CEB) with a magistrate turned out to be a difficult question, when five members of City Council (Councilmen Kiester and Batte were absent) met Tuesday, Aug. 12, for what they had anticipated as a joint workshop with the CEB.

After about 15 minutes of expressing their opinions and irritation with the topic at hand, the misunderstanding about the workshop format and the draft ordinance prepared by City Attorney Burt Saunders’ office, the meeting almost ended before it began. Council Chairman Ken Honecker, frustrated with the chain of events, was ready to entertain a motion to table the discussion.

The ordinance suggested City Council appoint at least three magistrates for a two-year term. Council Vice Chair Larry Sacher pointed out that 40 percent of Florida’s municipalities use a magistrate, 40 percent do not, and 20 percent use both a magistrate and a code board. The city of Marco Island has debated this point several times in the past and has never voted for the option.

Councilor Larry Honig said although the draft ordinance contained some “deal-breaker” comments and that he was disappointed and frustrated as well with the document after he had personally spent so many hours working with the attorney’s office on it and there was little to show for it, as elected officials, he felt it was their job to “dive in and clean it up.” Honig said he was in favor of a magistrate.

Councilman Amadeo Petricca, also in favor of a magistrate, said the decision would ultimately be made by City Council not the CEB. He said he realized the city’s codes needed improvement and could be “fixed as we go along.”

Three of the councilors present — Honecker, Honig and Petricca — were in favor of a magistrate. Sacher said he would be in favor of a magistrate plus a code board to deal with issues. He stated that in the past “ordinances have been selectively enforced” and when the previous city manager had told code enforcement to clear cases, fines were dropped, “it went away” and only hard costs collected.

“It was a poor job of enforcement,” he said, “but it’s getting better. We are getting away from the ‘silly’ process. People are being made aware of violations.” He went on to say that there had been a lot of subjectivity in the process from a previous board, and he wasn’t sure a magistrate alone could solve that. He recommended a magistrate and a board to deal with less clear issues.

Councilor Bob Brown said he was not ready to vote either way, as he saw too many issues with the ordinance that would have to be cleared up first. He said he wanted to hear concerns and suggestions from members of the current CEB first. Brown attends many of their meetings.

Finally, a recess was called while City Manager Roger Hernstadt and other sturdy staff members rose to the occasion by swiftly, playing musical chairs with the furniture and within 15 minutes had created a workshop atmosphere.

Roger Jacobsen, code enforcement manager for the city of Naples, was invited to make some comments. He said that his board meets a few times a year with 3-4 cases each time. He said, “It’s an autonomous group, not a money maker and not involved with the city manager.” He said they had considered a magistrate several times but had decided a change wasn’t needed. His board mainly issues warnings, and if they are not heeded, a citation will follow when the safety, health and welfare of the community is at risk.

Past Chairman and retired long-time CEB member Dick Adams said when a defendant comes before the CEB he is faced with seven people representing a variety of different backgrounds and education, but a magistrate represents years of legal training and expertise.

It was pointed out that often defendants may be facing their neighbors or friends on the board creating difficult situations for all, while a magistrate would be more able to make an unbiased decision. Under a magistrate, if accumulated fines were converted to liens, the city would be able to collect more money.

Paul Kampmeyer, current CEB vice chairman, said he has never missed a meeting, researches every case, and feels the present board makes very good decisions and can enforce ordinances as well as any magistrate. However, he conceded, a magistrate could assist with more intense cases involving judicial decisions.

Phil Kostelnik, CEB chairman, said in the five years he has been a board member he has seen major changes from cases that involved sewer replacement and foreclosures but the board has little control after the decisions have been made.

In reply to board member Ray McChesney’s question of where the board had erred or not done its job, Councilor Honig replied that was not the case, and he had seen neither favoritism nor indecision, but a board trying to enforce some ordinances that may be unenforceable. When dealing with codes like this, he said, it might be better to let these things “bubble up” and deal with them then.

Rony Joel, CEB member, said the city might save money with a magistrate as the city attorney would not have to be in attendance at meetings. He did not support having both a code board and a magistrate. It also was suggested that as a magistrate would be appointed for two years the new method could be given a two-year trial to see how it worked and then adopted or not.

By the end of the workshop. it was decided that City Attorney Saunders meet with each city councilman and rewrite the proposed ordinance. At the city’s Sept. 22 session, the question will come to an official vote.