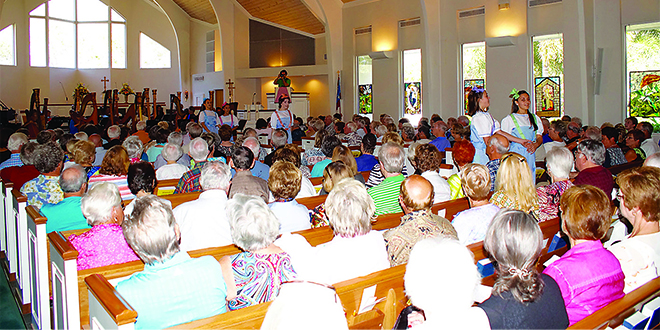 St. Mark’s Episcopal Church hosted the Naples Harp Ensemble to a full house. Performance included the Kellyn Celtic Dance Company, featured here with dancers to the music of “The Wizard of Oz.”

Dickie Fleisher, principal harpist of the Naples Philharmonic lead the Naples Harp Ensemble through vibrant renditions of “Invitation to Dance” by Weber, “Symphonie Fantastique” by Berlioz and “Ave Maria.”

Joining the ensemble are the very young members of the Youth Ensemble, led by Director Laura Lou Roth. These young harpists enchanted the audience with popular pieces such as “This is My Country,” “This Land is Your Land” and a “plucky” version of “La Paloma.” According to Dickie Fleisher, “One of them will be taking my place someday on the Naples Philharmonic Orchestra.”

For the finale, Director Dickie Fleisher announced to 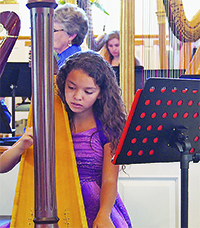 Kiana Hing, a member of the Youth Ensemble for three years, concentrates on finger placement.

the audience, “You’ll know this piece when you hear it.” It needed no further introduction. The first and middle sections of the piece were soft and pastoral. The famous magical section quickened as the ensemble delivered the familiar radio and television tunes of the
“Lone Ranger.”

The “William Tell Overture” was composed by Gioachino Rossini, yet, a single melody became more famous than the entire piece and took on a life of its own.

All the harpists made playing the harp seem so effortless, but there are many moving parts to master during a performance. The foot pedals, notes to read, and making sure fingers are on the right strings while watching the conductor and the music.

Many describe the sound of the harp as heavenly, celestial or magical. There is an Irish saying that goes, “All music is sweet until you hear the harp.” Enough said.

For more information on the Naples Harp Ensemble and upcoming events, visit www.naplesharpensemble.com.