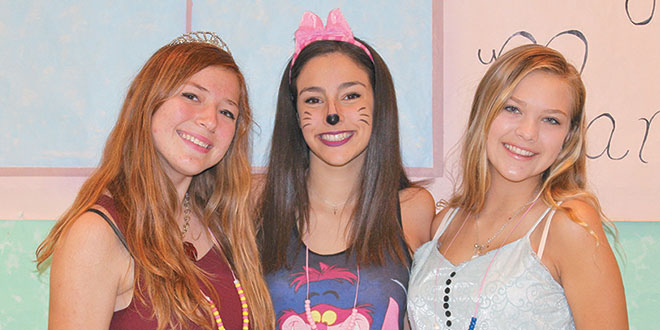 From left: Marco Island Academy student, Kayla Kladis as the Red Queen, and Lely studentsKatharine Spina as the Cheshire Cat and Bailey Dunstan as Alice. Photos By Samantha Husted

The Mackle Park Community Room was transformed. There were umbrellas on the ceiling, teapots scattered across the room and clocks everywhere. A long table stood in the middle with mismatched plates and flowers. It was a tea party fit for the Mad Hatter of “Alice in Wonderland.” Picture stills from the most recent film adaptation of the children’s book were posted onto the wall and characters walked around, offering their assistance to newcomers.

For the seventh year in a row, Mackle Park hosted its annual Mad Hatter Mother/Daughter Tea 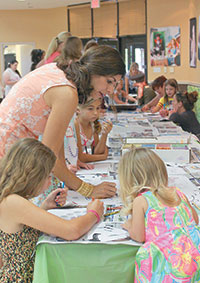 The day began with crafts and ended with a tea party.

Party event. This was the first year that the event was opened up to boys as well. All were welcome to crafts, face paint, and of course tea party fun.

“We always love to celebrate Mother’s Day so we thought that this would be a fun way to celebrate and also include all ages and age groups,” said Lola Dial, who was portraying the Mad Hatter for her seventh time. Lola is the recreation manager for the City of Marco Island Parks and Recreation Department. After years of experience, she has

The Mad Hatter was received with a standing ovation.

the role mastered perfectly. “We’re just so delighted to be able to do this for the community and we hope it continues to grow,” said Lola.

Bailey Dunstan of Lely High School portrayed title character, Alice while her two friends Katharine Spina, also from Lely, and Kayla Kladis of the Marco Island Academy, portrayed the Cheshire Cat and the Red Queen, respectively. Natasha Gengenbach of the Parks and Recreation Department portrayed the White Queen. The whole “Alice in Wonderland” crew was there to ensure that mothers and their daughters had a 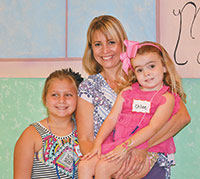 At the entrance, pictures were taken, and placedin frames designed later by the mothers and daughters.

Everyone who entered got their picture taken. Later the pictures were printed out and the mothers and daughters could create their very own picture frames to commemorate the day. The actual tea party portion of the event was saved until the very end, when scones and other treats were served.

When asked for the inspiration behind the theme Lola said, “The story has been around for so long. It was around when I was a young kid, when my grandmother was young, and I just think it’s a story for all ages.”