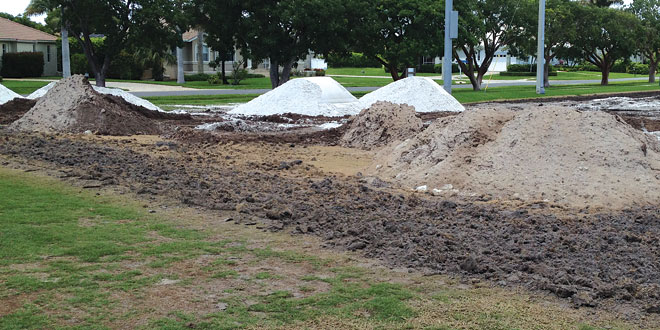 Anyone driving by Mackle Park lately, is asking one question: What happened to the athletic field? The usual scenes of kids kicking soccer balls or sports teams practicing have been replaced by men working tillers and huge piles of dirt and sand.

According to Bryan Milk, the city’s Community Affairs Director, the answer can be summed up in two words: fungus and compaction. “The field was hit with a fungus complex,” he says. “There were also compaction problems. Compaction results from heavy field use. The amount of play on the field beat down the top inch of of soil, and it became impermeable. This allowed water to stand on the field, which made a perfect environment for the fungus complex to spread.”

Specifically, city staff began noticing significant loss of the Bermuda grass turf on the Mackle Park field in late spring. By that time, the Rye grass the city planted in the winter to keep the field green had died off, and the field’s normal Bermuda grass turf should have pushed through. This did not happen.

Instead, Milk explains, a perfect storm erupted on the Mackle Park field. First, the top layer of soil on the field had been severely compacted from use during the winter months, preventing proper drainage. Second, the winter was cool and wet, and the transition between winter and spring was especially wet with nearly 10 inches of rain falling on Marco Island in April and May.

These elements kept the Bermuda grass fallow and created the perfect growth environment for two types of highly-destructive Bermuda turf fungi, Bipolaris and Piricularia. The result was a field of grass peppered with round, brown or purple spots. According to the University of Florida’s Institute of Food and Agricultural Science, the disease turns the grass brown, and eventually, it dies, thinning

the turf in patches. This also is called “melting out.”

Milk and his staff reacted quickly, calling in a platoon of landscaping and turf specialists, including the John Deere Landscapes, to help devise a four-prong action plan. First, the remaining grass was killed off, and the turf tilled.

Next, the field was laser graded, leveling the field from south to north to allow storm water to run off into the drains on Leland Way. “The field is so flat around here that we had to create our own slop,” notes Milk.

Third, a sand base will be installed as top dressing to allow the field a more penetrable base, and finally, Bermuda grass sod will be laid.

Despite dicey weather in June, which amounted to another nearly 13 inches of rain, Milk says this process — including time for the sod to root — should be complete by the third week of August. The price tag to the city: roughly $47,000, which is coming from an emergency reserve fund.

“This project will take care of our problem… The bands of wind and weather have been really hard on us, but everything seems to be going according to schedule,” he adds.

This is good news for local youth sports organizations, such as the Optimist Club of Marco Island, who rely on the Mackle Park field to support their practices. Until it is ready, though, these groups are using the fields at Winterberry, Tommie Barfield Elementary and Marco Island Charter Middle School for practices.

According to Eddie Webb, president of the Optimist Club, the group’s lacrosse and fall football programs will feel a slight pinch, but he is not concerned. “The new lacrosse program had to move practice days around a little and football will be impacted later this month,” he says. “We moved one day of lacrosse practice — not a big impact.”