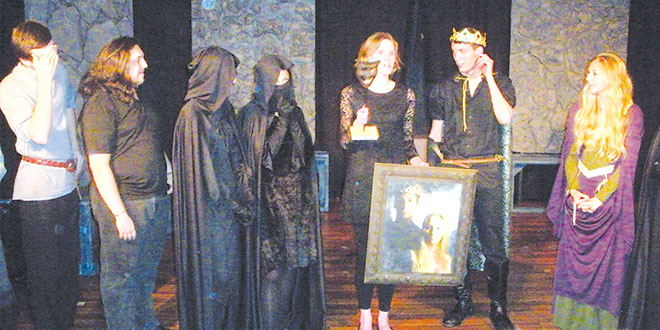 Kaitlynn McRae (center) with the cast of “MacBeth.” PHOTO BY DON MANLEY

The greed, treachery, betrayal, deceit and drama encapsulated in Shakespeare’s “Macbeth” were skillfully and passionately brought to life by students from the Marco Island Academy.

The presentation of one of Shakespeare’s most renowned works graced the stage for five performances recently at the Marco Players’ theater. The play was put on by the Marco Island Shakespeare Festival, marking the third year in which the organization has collaborated with MIA on a production one of the Bard’s masterpieces.

Battle-worn Macbeth, the doomed King Duncan, the conniving Lady Macbeth and prescience of the Wyrd Sisters all sprang from the stage in spirited performances by the youthful cast. Their efforts were warmly received by the audiences that turned out for the shows.

“The model for everything that we do is based on our motto from Konstantin Stanislavsky, who was a Russian actor and director at the Moscow Art Theater, said Jacquielynn Wolff, founding artistic and executive director of the Marco Island Shakespeare Festival. “He said that the purpose of theater is to pierce the human subconscious and act as a looking glass for the audience. That really is the basis for everything that we do.”

“We teach William Shakespeare as [being] one of the world’s greatest humanists,” she added. “We say that if you take any character in a Shakespeare play and you strip away their age, gender, culture, religion, you’re left with a human being. We teach that we all share in the human condition.”

Wolff said that she and Kaitlynn McRae, who directed the production, train the youthful actors to take their experiences with the human condition and infuse them into their character’s dialogue.

“The idea is, these words will go out into the audience and the audience will make their own interpretation and a hundred new meanings might appear,” she said. “What that allows for is the universalism of Shakespeare’s text. That’s why it’s universal, because it can mean something very personal 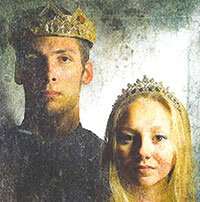 Macbeth and Lady Macbeth were portrayed by Dylan Rogers and Jessica Lang.

to every single member of the audience.”

McRae praised the cast of 13 for their dedication to mastering the challenging piece.

“They are wonderful people, just as people,” said McRae. “And they are wonderful students and they trust me for reasons that I don’t even understand. They’ve also taught me to trust myself, and I think that’s the greatest gift you can give anyone and I hope that I’ve been able to impart that to them, as well.”

Macbeth and Lady Macbeth were portrayed with aplomb by Dylan Rogers and Jessica Lang. They said the roles were indeed challenging, but they could not have been happier with the end result.

“Half the battle is learning what the words mean, so after we mastered that, we could really dive into character dynamics, so we could portray that on stage,” said Lang. “But it’s a process and once we got through the process, it produced this wonderful outcome and I’m really proud of it.”

Rogers described portraying Macbeth as being one of the most intense tasks he’s ever taken on, because of the character’s dynamics, and the amount of time and effort involved.

“It was because, at least for me, acting is connecting and being able to connect with a character like Macbeth is very difficult and we had some very intense moments,” said Rogers, who is currently portraying Leo in the Island Theater Company’s production of ‘Leading Ladies.’ “That’s what it was like. It was intense.”

For Rogers, the highlight of the production occurs in its latter half as Macbeth begins to become unbalanced as the weight of his misdeeds begin to set in.

“Letting go and trying to portray that was a lot of fun, even though it’s really scary at the same time,” said Rogers. “The highlight for me is the last three scenes when I just go all out, you can just do whatever and it works.”