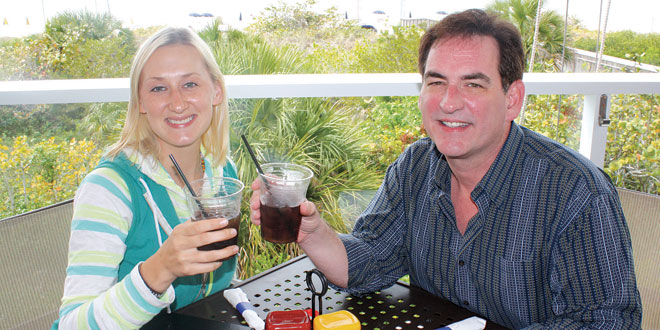 My mother has often told me: “Well Natalie, you know that you pick ‘weird’ people for friends.” Personally, I prefer the term “eccentric.” Whether the eccentricities are of an artistic, neurotic, self-deprecating or self-absorbed manner (not naming names), I like it—all of it. After all, variety is the spice of life and my weird/eccentric group of friends only makes my world more interesting.

My dear friend, Randall Kenneth Jones (RKJ), is one of the biggest “weirdos” I know—his innate nuttiness is probably the reason I find him so fascinating.

Over many a lunch date he has taught me, challenged me and, most importantly, made me laugh. He may be “weird” according to my mother’s standards, but his aptly named creative communications company MindZoo—and its many spinoffs—proves my theory that eccentricities create extraordinary people.

My first meeting with RKJ (“There are waaay too many Randy Joneses out there, including the original cowboy from the Village People.”) was over lunch to discuss “lunch.” RKJ and his friend Kathleen Gravatt proposed their Marco Players Lunchbox Series performance for an article.

The one-show performance, based on RKJ’s “confessional development” blog AttackBunnies.com, showcased RKJ as a “David Sedaris meets Dale Carnegie” jokester as seen by his absolute fear of bunnies, his love of Judge Judy, his potentially catastrophic encounter with a young Jodie Foster and many more outrageous “work/life” anecdotes.

This was by no means RKJ’s first appearance on stage. A graduate from the University of Missouri-Columbia with a major in Speech and Dramatic Art, RKJ has lived out his life on the stage for longer than he’d probably like to admit. He recently directed “The Taming of the Shrew” for Shakespeare in Paradise and will appear—in a dress—in “The Producers” in February and March at the Sugden Theatre in Naples. (Did you catch the part about the dress?) 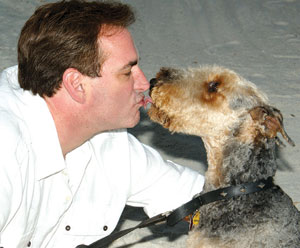 office,” he told me, adding, “my involvement in the arts has really given me amazing training to succinctly communicate my thoughts and ideas as well as how to be a truly ‘creative thinker.’”

At our second lunch, we discussed marketing strategies for the newspaper. Not only does RKJ have a ridiculous sense of humor, he is a marketing genius. His portfolio includes work performed for such widely recognized brands as TJMaxx, OshKosh B’gosh, Pier 1, The Washington Post, the Baltimore Ravens and GEICO.

To RKJ, MindZoo exists solely to help mold, shape and tell a client’s story. “Whether its words or images, marketing or public relations, print or online, I understand that all business communication must be compelling and provide value, but it is also meant to sell something: a product, a service or an emotion.”

It must be said, MindZoo is pretty much the perfect name for RKJ’s brand. I can imagine the thoughts in his head roaring like lions, screeching like baboons and slowly forming before popping out like a turtle’s head.

Not satisfied until MindZoo “stood for something more important than profits,” RKJ launched RediscoverCourtesy.org in an attempt to remind professionals in the business world to be kind to one another again. He told me, “I really came up with Rediscover Courtesy because of my kids, both of whom are in college. The idea of ‘professional courtesy’ is getting lost in the age of text messaging, Twitter and email. Technology is chipping away at one-to-one communication, something that is, and always will be, a key factor when it comes to success.”

RKJ’s number one piece of advice when it comes to professional courtesy: Remember The Golden Rule: “Do unto others as you would have them do to you—at work.”

Getting together for a third lunch, RKJ and I discussed the idea of having his dog— yes, his dog—write an advice 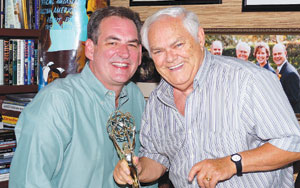 column for the Coastal Breeze. Tony, a quick-witted Airedale, subsequently developed “Dog & Style” and quickly garnered fans thanks to his blunt but humorous ability to answer any question thrown his way. (RKJ serves as dog Tony’s—ahem—“manager.”)

By conducting best-practices interviews with executives, business leaders and celebrities, RKJ quickly discovered a common denominator between his subjects. “In one way or another, their success has come from a high degree of clear communication, respect, focus and yes, professional courtesy.”

To date, RKJ’s “Business Class” lessons have come from the likes of Charles Gibson, Jack Hanna, Regis Philbin, former NBA Coach Jack McKinney, Magic Johnson and former President of Good Morning America Phil Beuth, to name a few. According to RKJ, “When your company name is Mind Zoo—and you get to talk to Jungle Jack Hanna—it’s a very good day.”

This time, RKJ declared, “I’m taking my act on the road.”

“Which one?” I asked in all seriousness.

“I’m taking my professional courtesy initiative on the conference and seminar circuit,” he replied. “Professional courtesy, positive communication and creative thinking are so important for the success of any organization. Plus, every organization can benefit from an increased focus on courtesy, creativity, productivity and success. Besides, didn’t you tell me I was funny too?”

So is Randy weird? Eccentric? An idiot savant? I certainly doubt the latter. My personal opinion: he’s a “Renaissance Man” for a new age. He is intelligent, incredibly funny and can put together a story faster than I can tie my shoes—and I wear sandals!

RKJ is a jack of all trades: an author, marketer, public speaker, ghost writer, columnist, actor, director and mentor. With all that under his belt, I’m certainly glad to have him as a part of my personal collection of eccentric friends.