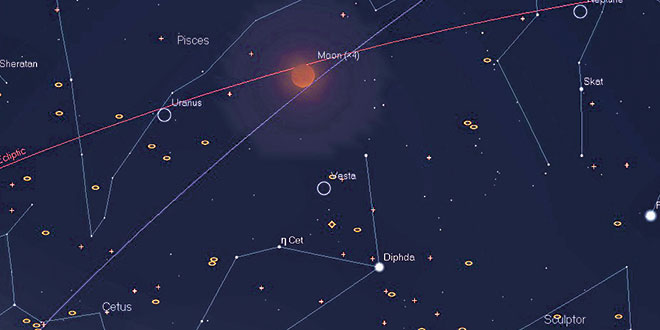 Looking Southeast 11:00 PM on September 27. Usually you don’t need a finder chart for the Moon, but you might this night! SUBMITTED PHOTO

Usually you don’t need a finder chart to locate the Moon, but the evening of September 27th may be an exception. The last lunar eclipse for several years occurs between the hours of 7:47 PM and 1:22 AM, with mid eclipse at 10:48 PM.

At 7:47 PM the Moon begins to pass into the shadow cast by the Earth. Don’t interrupt your dinner – it is only a partial shadow (called penumbral), and the dimming of the Moon is scarcely perceptible. More than an hour later at 9:07 PM the Moon touches the umbra, the darkest part of the Earth’s shadow. Ever so slowly it looks like the Moon is being swallowed, the shadow taking over an hour to cross the disk. Finally, at 10:11 PM the eclipse becomes total.

The Moon will actually remain dimly visible as sunlight is refracted through the Earth’s atmosphere. Essentially the Moon is illuminated by all the sunrises and sunsets of the world – which is why it is now reddish in color. As the Moon moves deeper into the shadow it gradually becomes a little dimmer, but during this particular eclipse it does not penetrate deeply into the Earth’s umbra, so it does not become as dim as it can be.

The brightness of the Moon, or lack thereof, is not readily predictable since it depends on the general weather that the Earth as a whole is experiencing at the time. Heavy cloud cover around the rim or a large volcanic eruption can make the Moon nearly invisible, but this is very rare. Usually the best description of the color is brick red.

An eclipse can only happen when the Moon crosses the ecliptic (hence the name “eclipse”), 180 degrees away from the Sun for a lunar eclipse, and 0 degrees (passing in front of the Sun) for a solar eclipse. The solar eclipse is far more spectacular than the lunar variety, however the lunar one has several advantages.

For one, the lunar eclipse is visible over an entire hemisphere simultaneously; another is that unlike its solar cousin, a lunar eclipse can be stared at all night long in perfect safety. A lunar eclipse also is a rather long drawn out affair lasting for several hours, although totality usually only lasts an hour, or sometimes two.

At 11:23 PM the Moon begins to leave Earth’s umbra and the above sequence happens in reverse order. By 1:22 AM the Moon clears the last vestiges of the penumbra and tonight’s show is over!