Love is in the Air – Courtship Rituals of Black Skimmers 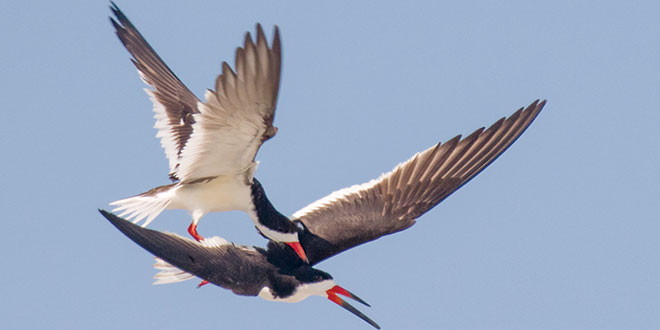 Black skimmer male riding on back of female.

A walk to Sand Dollar Island feels like a world away as you leave Marco’s “condo rises” behind. This small sand spit of unspoiled, sugary-white sand is a birder’s paradise where you’ll encounter resting, nesting and feeding birds. It is one of Florida’s Great Birding Trails and a flyover site for over sixty species of rare and protected birds. Sand Dollar Island is also a state designated “Critical Wildlife Area.”

During springtime, love is in the air, as birds on Sand Dollar Island look for a mate. Courtship rituals range from something sweet and simple like head bowing, or a risky aerial display. The black skimmers take their 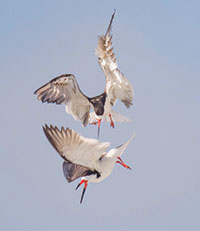 Pair of black skimmers in an aggressive downward swoop. Photos by Jean Hall

passion to the air for a breathtaking aerial display. You’ll often observe a black skimmer soar into an aerodynamic ascent, wings narrow, pointed and streamlined. In an aggressive swoop, feathers fly. The male bird lands on the female’s back, as they cruise the wind in a synchronized duet. The flight’s grand finale is an elegant and electrifying downward glide from the sky, as they land softly on the sand together. All beautiful and soundless, with the blue sky providing a natural backdrop. It is a timeless choreography, colorful, fast, inspiring and imprinted in black skimmers since the beginning of the species.

The prize for this elaborate display is

Courtship ritual can be as simple as bringing a gift to the female.

to attract a mate and produce young with the partner of their choice. On Sand Dollar Island, black skimmers are busy feeding their young, getting them strong for their first flight out of the colony in early September. Some of the black skimmers migrate to South and Central America, but many may stay right here along the Gulf Coast.

• Only bird species in the U.S. that has a larger lower mandible than upper mandible. 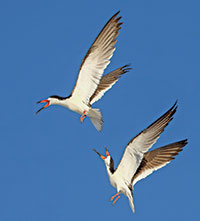 or “kur, kur, kur,” similar to the barking of a small dog.

• Dogs and humans on the beach flushing nesting shorebirds.

• Trash on the beach attracts predators, such as crows, rats and raccoons.

What can you do to help?

• Respect posted areas and keep your distance from nesting shorebirds.

• Dogs are not allowed on Marco Island’s beaches.

• Keep it clean – take your trash with you.