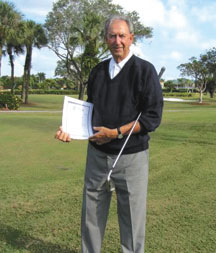 Lou Thibeault’s 50-years of teaching as a PGA of America pro.

There are not many people who can claim to have done the same job for over 50 years, to have done it well, and still greet a working day with an optimistic smile. Lou Thibeault, well-known local golf professional, can make that claim. Recently recognized by the Professional Golf Association of America for 50 years of service, Lou enthusiastically recalled his history as a teaching pro and some of the many individuals to whom he is grateful for support and advice.

With a tinge of nostalgia but no regret, Lou remembered how, as a youth, he might have dreamed of being one of the great players. But once reality set in, he soon understood that part of being an effective golf professional was to understand that talent was only part of the requirement: he had to find and identify a personal niche — as a good club professional, teacher, or player, or a combination of all. For Lou, the choice was simplified when he experienced the joy of helping people improve their golf games.

“Teaching chose me,” he said, “and all the years of coaching continue to motivate me.”

Lou was 10 years old when World War 2 ended, and he spent every weekend working a shoe shine box his father had made for him, polishing the shoes for returning soldiers. For the youngster in Brockton, Massachusetts, those ten-cent shines earned him enough to become a junior permit player at the public golf course where he was eager to caddy and play.

“There I was, just a little kid, and I was overwhelmed when such an important man as Joe Downey, the Mayor of Brockton took notice of me. He said I had a good swing and would become a good player one day.”

The next person to help him with self-esteem and positive feedback was his seventh-grade teacher, Miss Cote. Lou was impressed that in her own free time, this devoted teacher established golf matches among the students and created competitions to develop their honesty and responsibility for their actions. From this point on, Lou went to the golf course daily and played as much golf as possible.

At age 14, he went to work in the pro shop for PGA pro George Aspacker, multi-tasking as starter, go-for guy, and clean-up person. This disciplined man taught Lou punctuality and commitment, and contributed points to his golf ability by emphasizing the importance of the short game, a philosophy that pros still teach today.

In high school Lou was part of a six-man golf team that won the state championship in 1952. He remembers Coach Lloyd Avery for his positive impact, stressing strategy, percentages, and matching playing partners for compatibility to enhance performance.

Aiming to be a golf pro and tour player, Lou headed for St. Petersburg, Florida two weeks before his 18th birthday, with $180 in savings. He arrived with his golf clubs and possessions to find his contact had moved, so he took a bus to Orlando to see a golf pro from Brockton who had settled there. He could not offer Lou work, but he advised him to try Miami, where Lou called golf pro Stan Neptune in Hollywood, 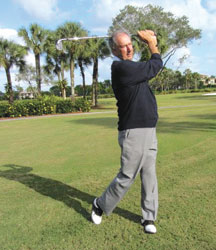 Florida, a previous contact he had made in Brockton. Lou attributes Neptune with encouraging him to improve his golf skills while connecting him with three wonderful positions: teaching pro at Idlewild Golf and Country Club on the south side of Chicago, where he worked for five seasons; the Sun Spa at Hollywood Beach, Florida where he replaced the well-known pro Herman Barron and stayed for six seasons; the Dennis Pines Golf Course on Cape Cod, a new course where he was employed as head professional and general manager.

Between Idlewild and the Sun Spa, Lou became affiliated with the Roney Plaza Hotel in Miami Beach, which had just purchased land to build a nine-hole course designed by Joe Kirkwood Jr. A well-known player on the tour who had just missed winning the US Open one year, Kirkwood may be better known for his movie role as Joe Palooka.

Lou said he always found golf a great vehicle for networking and connecting with people from different places as his student list grew to include Harry Winston, the jeweler, the son of Frank Chikinian from CBS Sports, and Don Adams of the Get Smart television series.

After working at the Highlands Links Golf Course in Truro, Massachusetts on Cape Cod, where he gained experience as head pro, greens keeper and manager, Lou purchased the Foxcroft Golf Club in Maine, which he ran until he sold it 22 years later.

During this time, while wintering in West Palm Beach, an invitation to a golf tournament in Marco Island brought Lou to southwest Florida where he visited with Mike Mollis, golf pro at the current Island Country Club. While teaching there as an independent contractor, Lou commuted weekly from West Palm Beach for a year, until he moved to Marco Island and stayed for three years.

Then the opportunity to become head golf professional at the Hideaway Beach Club arose.

Lou’s lifelong humility shows as he states how privileged he has been to work at these clubs and to have become friends for life with so many people.

“One of the greatest moments of my life,” he said, “was when I was honored with a retirement party after 10 years of service at the Hideaway Beach Club. About 250 people attended and I never felt as humble and honored before or since. Many of my ideas came to fruition and my efforts at Hideaway were much more noticed that I could ever believe. I still reread some of those farewell cards today and realize just how many appreciated my work.”

Lou and his wife Lucy now reside on Marco Island. Teaching is far from over for Lou Thibeault with his zest for life, golf, and happiness in sharing methods with people to improve their golf games.

“My 58 years as a golf pro and more importantly, my 50 years as a member of the PGA of America have brought me the joy of a full and happy life, “ he said.

Presently you can find Lou teaching at the Links of Naples, wondering, “Where did those 50 years go?”